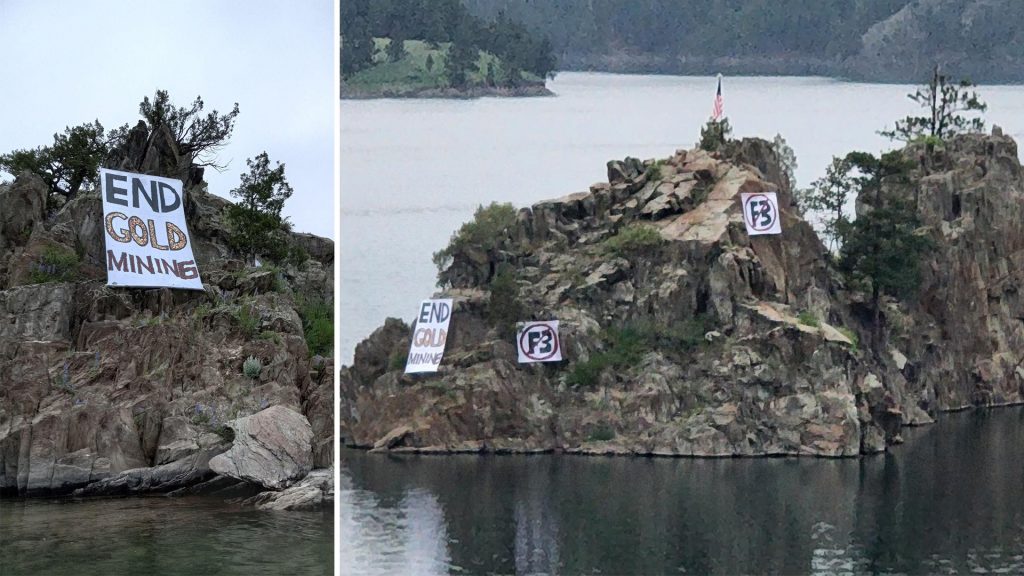 Silver City, SD – Early Monday morning, water protectors dropped banners at the Pactola Reservoir island in opposition to new proposed gold exploration in the Black Hills, or He Sapa. F3 Gold, a Minneapolis-based prospecting company, is waiting on one last permit approval before they can begin their exploration activities, which they say will “have very minor, or no environmental impacts.”

Water protectors with the autonomous ‘No Gold Mining in Sacred He Sapa’ group shared in a statement this morning that they demand the U.S. Forest Service deny F3 Gold’s permit because they don’t “have permission for their illegal activities from any of the dozens of tribes with treaty-protected and ancestral connections to the He Sapa.”

They also stated that this new project is “part of a legacy and ongoing reality of toxic mining destruction and desecration.”

The Fort Laramie Treaty of 1868 was supposed to guarantee the Great Sioux Nation “undisturbed use and occupation” of the Black Hills, but just nine years later that treaty was broken when General Custer led the Black Hills Expedition, leading to the U.S. government violently seizing the Black Hills because of the discovery of gold.

After many years of fighting in court, the U.S. Supreme Court finally agreed with the Great Sioux Nation in a 1980 ruling that their land was illegally taken. However, the court did not rule for the land to be returned.

F3 Gold is planning to use “precision, low-impact diamond core drilling to test scientific theories at depth and determine the potential for an economic gold deposit.”

It’s not only the amount of water being used that concerns water protectors, but the “attempt to desecrate sacred sites and poison water at Jenny Gulch, near the headwaters of Rapid Creek in the Sacred Black Hills.”

“How can the Amerikkkan settler state celebrate independence when it only works through exploitation and oppression?”

No Gold Mining in Sacred He Sapa