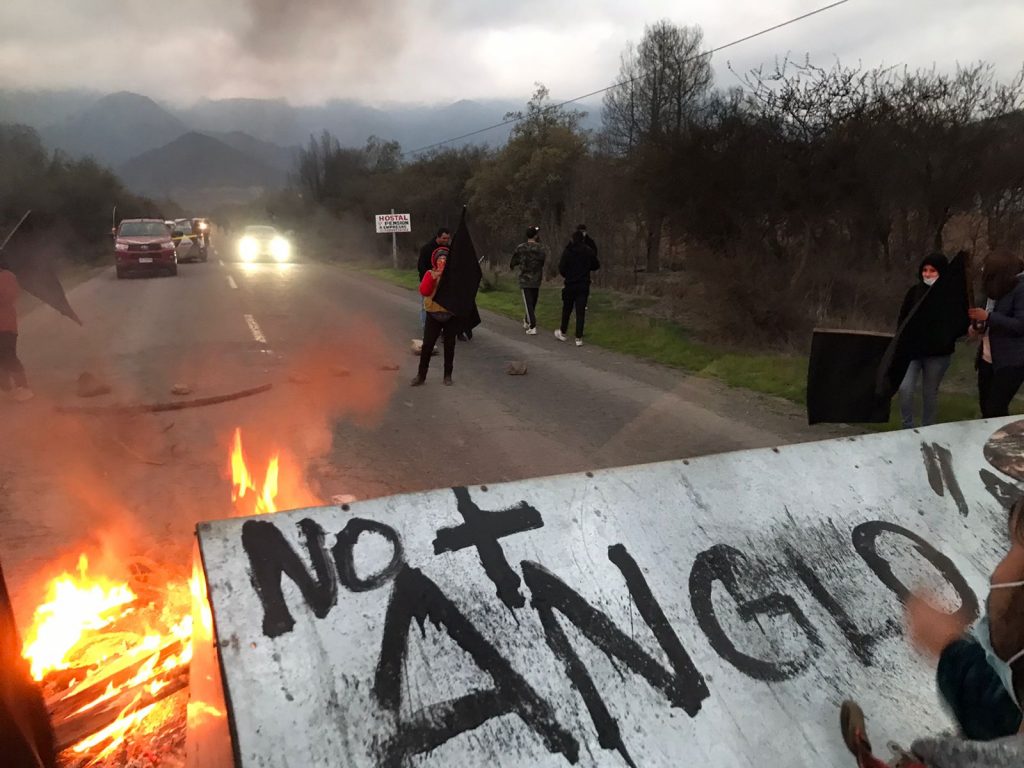 Anglo American is one of the largest mining companies in the world. In Chile, it has mining operations in three regions of the country: Los Bronces in Lo Barnechea, the Metropolitan region, El Soldado in El Melón in the Valparaíso region, and Collahuasi in the Tarapacá region.

The mining operation of the Anglo American multinational’s El Soldado mine has generated an environmental sacrifice zone in the Nogales district, in the Valparaíso Region. The community is currently concerned about alleged cracks in the El Torito tailings dam. The community are distrustful and remain mobilised, demanding compensation, not simply commitments, by the transnational.

“The mobilisation has been carried out peacefully and the demands are related to the commitments that Anglo American has with the community which they have not fulfilled.” Jorge Ramírez, El Melón Community, Chile.

We live in the area of influence of El Soldado. Anglo American’s operations have affected everything in its path. The ancestral and traditional customs of the communities have been affected. Anglo American has been affecting our human rights to live in a healthy environment, because they have polluted our land, over-exploited our water and polluted our underground water sources. – Carlos Vasquez, El Melón Community, Chile.

They also reported to have seen works happening on the downstream slope of the main containment wall, and explained that the wall’s geometry did not look normal from what they could observe. Gullies, reportedly large in size, can also be seen on the surface of the containment wall.

Reports have already been made to the relevant authorities, Semageomin and the Environment Superintendency, with the aim of getting verification on the ground of any issues with the operation or construction of the El Torito tailings reservoir in due course. Anglo American is yet to make a statement in response to the community’s anxiety and concern over the safety of the reservoir.

The No + Anglo Movement is an intercommunal organisation made up of members of various towns that would be affected by the mining undertaking. Its activists reside in the towns of Barnechea, Colina, Lampa, Tiltil, and El Melón. The group was set up to defend the territories affected by the mining company’s expansion project. Currently they are presenting claims before the Committee of Ministers of the Chilean State. They oppose the “insistence of the transnational giant on carrying out its monstrous project.” According to the activists, the work “would end up killing the basins and saturating the Valparaíso region and Metropolitan region areas with greenhouse gases.”

On April 23, the Anglo American mining company issued a press release stating that the Environmental Assessment Service (SEA), through the Consolidated Assessment Report (ICE) of the Los Bronces Integrated Project (LBI), announced the rejection of the environmental assessment of the initiative. However, the committee of Ministers must support this decision.

Los Bronces Integrado project involves an underground mine between the Cordillera and the Valparaíso region in Chile. This project is immersed in the most important area of ​​glaciers, which are the most important water reserve for the country’s capital. This project generates a direct impact on nature. In 2010, it was already shown that the Los Bronces operation would be directly affecting the area of ​​the glaciers.

Read the public statement of the No+Anglo movement. Support and spread the fight of Chilean communities against Anglo American.

We are a movement born with the objective of defending our lands from Anglo American’s Los Bronces Integrado expansion project. Our movement is made up of communities who are suffering first-hand from the plunder of their territories by the mining giant.

We are currently presenting our demands to the ministers’ committee, while the transnational giant insists on appealing to this same committee to proceed with its relentless and immoral idea of carrying out this monstrous project, which will end up killing the river basins and saturating the Valparíso and Metropolitana regions with even more greenhouse gases.

The 150,000 tonnes of fine copper that could be extracted from our mountains between now and 2036 by the transnational Anglo American are not, of course, reasons to back down – the Environmental Impact Service gave the project a negative Environmental Qualification Resolution in the first half of this year.

The risk to the health of our communities is inescapable, as is that to our sclerophyll forest, glaciers and that posed by the excessive daily use of water. We can see that the ecosystem services that permit living beings to exist in this area will all be affected and by extrapolation, with similar projects happening elsewhere, so will our planet. Climate change is the product of the greed and incomprehensible actions of these industrial monsters.

Today we want to report and make known that one of our members is receiving death threats by telephone and has been followed by strangers who say they know the places our comrade in socio-environmental struggle frequents.

We declare our condemnation of any act that threatens one of our members and we will make such acts known to the National Institute of Human Rights, under article 9 of the Escazú Agreement.

We demand that the authorities take immediate measures to protect our members and investigate these events given the critical context we find ourselves in, where only a few days ago the home of Lorena Donaire – a prominent activist, environmental defender, founder and spokesperson of Nacional de Mujeres MODATIMA and member of MODATIMA La Ligua – was set on fire in the region of Valparaíso.

Translated from the original Spanish by Holly Jones 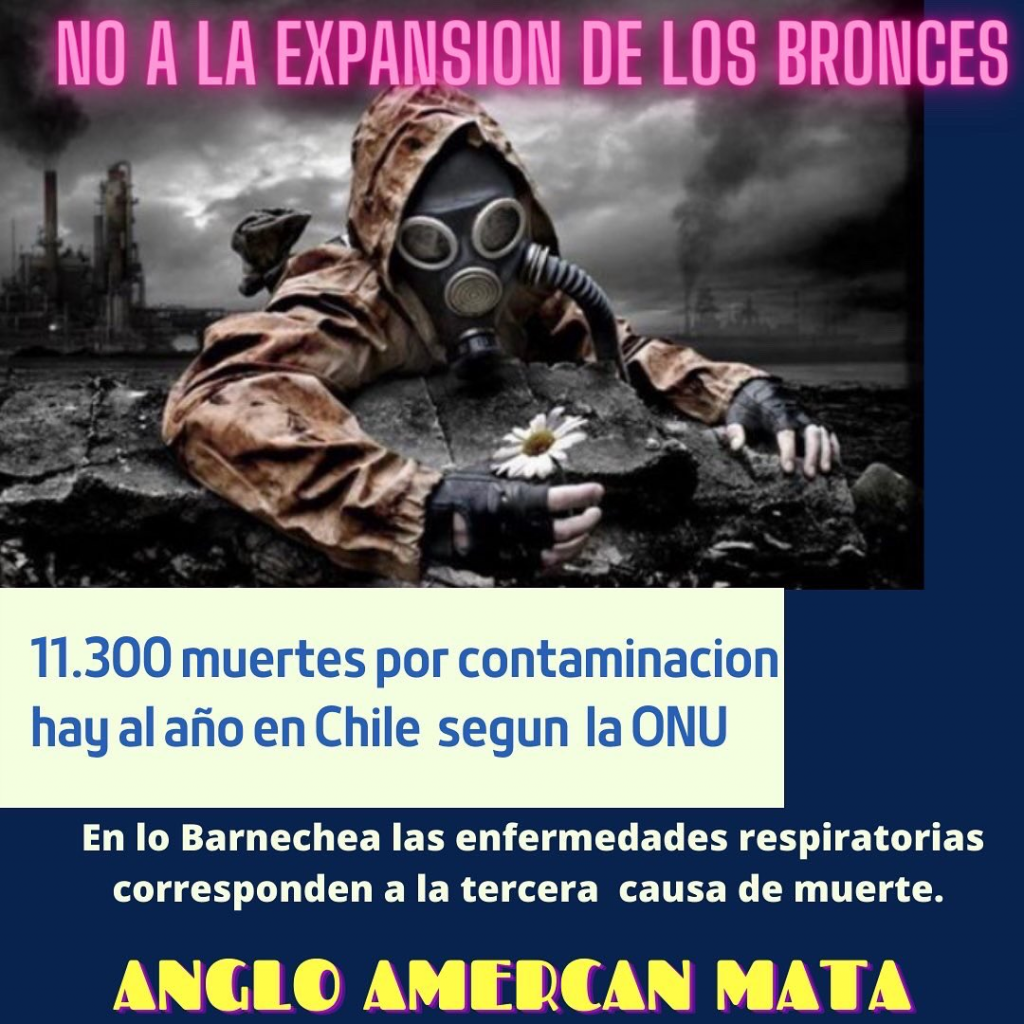