by Sarah Johnson / The Guardian 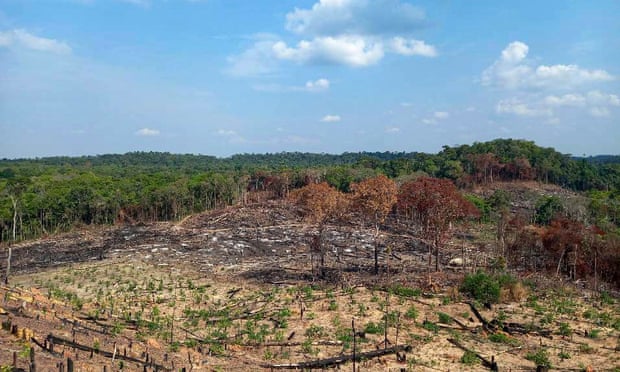 The rate of deforestation in Cambodia is one of the highest in the world.

Rampant illegal logging of protected forests is threatening the cultural survival and livelihoods of indigenous people in Cambodia, according to Amnesty International.

Members of the Kuy people, one of the largest of Cambodia’s 24 indigenous groups, told Amnesty how deforestation in two protected forests, along with government restrictions on access have undermined their way of life and violated their human rights.

More than 6,200 hectares (15,300 acres) have been deforested across Prey Lang and Prey Preah Roka protected forests in 2021, according to a report published on Friday.

Cambodia has experienced one of the highest rates of deforestation in the world, losing about 64% of its tree cover since 2011, according to the report.

Richard Pearshouse, Amnesty International’s head of crisis and environment, said: “Rampant illegal logging in Cambodia is posing an existential threat to the country’s remaining primary forests, and the indigenous peoples who depend on them for their livelihoods, their culture and their spiritual practices.

“Cambodia’s approach to conservation is characterised by official corruption and a complete disregard for indigenous people’s rights. If the Cambodian authorities don’t change course soon, the country’s protected forests will be illegally logged into oblivion.”

The report, based on interviews with 20 community activists protecting the two forests, which are home to significant Kuy populations and contain protected wildlife sanctuaries, said Cambodian authorities were failing in their duty to protect indigenous people’s rights by not adequately policing the areas.

Embedded corruption in the government and within the police is fueling the illegal logging trade, and posing a risk to some of the country’s most important remaining forests, it said.

One local activist told the organisation: “The big problem is that the authorities… are only interested in collecting money.” The activist added they had “tried many times” to tell provincial office officials about logging and given them photos and other evidence. “They go to investigate it – but they only investigate it to collect money from the loggers.”

Illegal logging activities have had a devastating impact on the Kuy people’s livelihoods.

They collect resin from trees, which is sold and used domestically for low-grade lighting and commercially for boat caulk, paints and varnishes. Loggers have targeted resin trees for timber production.

Thyda (not their real name) told Amnesty that about 70% of resin trees had been lost in Prey Preah Roka in recent years. “Many people from outside … come and steal our trees when we are not in the forest – especially during the rice season when we are planting saplings or harvesting rice … Sometimes in one day, 30 or 40 resin trees will be cut.”

The report also documented how grassroots activists were prevented from carrying out forest patrols to document illegal logging. Ministry of environment officials said the restrictions were allowed under Cambodian law; this is challenged by Amnesty.

Neth Pheaktra, secretary of state and spokesperson of Cambodia’s ministry of environment, rejected Amnesty’s claims as “baseless”. He said Kuy people “have full rights to patrols allowed by law and get full cooperation from Ministry of Environment’s forest rangers and authorities”.

He added: “The ministry of environment is very glad to emphasise that the large scale of natural resource offences in the protected areas including Prey Lang and Prey Preah Roka Wildlife Sanctuaries are no longer occurring, but there are still small scales of illegal logging.”

Amnesty International has previously documented how Cambodian authorities have denied environmental activists access to the rainforests, and how their ban on community patrols allowed illegal logging to continue unchecked.