by Alleen Brown / The Intercept 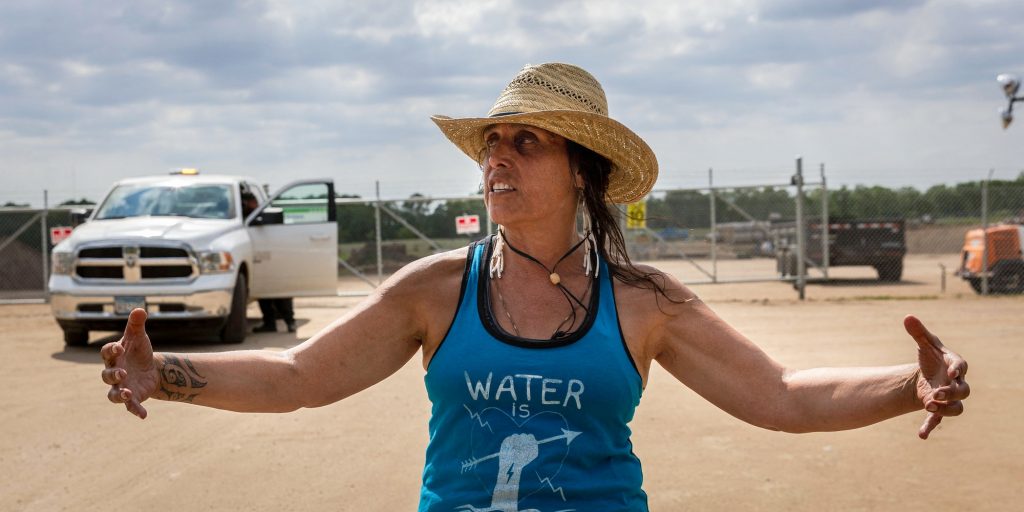 Environmental activist Winona LaDuke, Honor the Earth founder, speaks to the media in front of a section of the Enbridge Line 3 pipeline outside Park Rapids, Minn., on June 6, 2021. Photo: Kerem Yucel/AFP via Getty Images

AS PART OF its efforts to build and operate pipelines, the oil transport company Enbridge used a tracking system that identified Indigenous-led groups as key threats.

Internal documents reviewed by The Intercept describe how Enbridge launched an initiative known as Opposition Driven Operational Threats, or ODOT, to focus the company’s attention on Indigenous opposition to Line 3 and Line 5, two controversial pipelines that transport carbon-intensive tar sands oil between Canada and the United States.

The documents provide a rare window into how fossil fuel companies counteract political opposition. In Enbridge’s case, its ODOT initiative goes so far as to track community gatherings of pipeline opponents and label tribal lands as areas where the company faces threats.

“To the rest of us, ‘threat’ means actual threats to life and liberty, but to them this is all about how much money they can extract while carrying out an operation that is environmentally devastating,” said Mara Verheyden-Hilliard, director of the Partnership for Civil Justice Fund’s Center for Protest Law and Litigation and an attorney representing opponents of Line 3. “You begin to have this perversion of concepts of what actually are true threats.”

Information about how the internal system works is limited, but Verheyden-Hilliard said that there could be civil rights implications depending on whether any state or local agencies are involved in the collection of data for ODOT and how Enbridge uses the information the initiative produces. The existence of the tracking system, she said, was especially troubling considering Enbridge’s payments to law enforcement agencies for policing pipeline opposition. Gatherings of pipeline opponents are protected by the First Amendment. In communities in which tribal governments have invoked their treaty rights to challenge pipeline paths, the tool could potentially be used to develop divisive campaigns aimed at pressuring tribes to back down.

“As part of Enbridge’s risk assessment process, we work to better understand the communities in which we operate, views about energy infrastructure and various perspectives regarding our projects and operations,” Enbridge spokesperson Juli Kellner said in a statement to The Intercept. “Doing so enables us to actively address issues through engagement and dialogue. We take seriously our role in delivering the energy people count on every day and ensuring safe, uninterrupted and reliable operations.”

ENBRIDGE DESIGNED ODOT as a sweeping system to identify emerging outside threats to the company’s business. The program has been managed by a team of Enbridge employees, representing various areas of expertise across the company, who planned to coordinate with various departments within the liquids pipeline division.

Enbridge’s definition of a threat includes virtually anything that could negatively impact the company. ODOT was meant to protect against not only property damage but also reputational harm to the company. A list describing categories of threats included activities that involved trespassing or disruptive protests as well as “awareness events,” which appeared to reference gatherings for pipeline opponents to get their message out. A tribe considering rejecting an Enbridge easement, often by invoking its treaty rights, could also qualify as a threat.

The ODOT initiative includes a system that assigns a risk score to geographical areas. One of the factors used to tally the score is “Indigenous Opposition.” Enbridge has used the scores to generate color-coded maps that often identify areas covered by treaty rights as places where the company faces a threat.

On the maps, lands of the Red Lake Nation, the Leech Lake Band of Ojibwe, and the Bad River Band of Lake Superior Chippewa — all Upper Midwest tribes that have opposed Enbridge pipelines in court — have been marked in red to indicate a threat area.

“Enbridge does not and has never viewed Indigenous communities or Tribal Nations as threats,” said Kellner, who did not directly address the maps. “We listen to and engage with tribes and communities to advance matters of mutual interest.”

Through ODOT, the company also tracks individual pipeline opposition groups. To facilitate the monitoring, Enbridge has used a system to count the number and types of “threats” to Enbridge projects carried out by particular “threat actors” over time. In 2021, the counts focused particularly on Line 3 and Line 5, tracking more than a dozen threat actors, including Indigenous-led pipeline resistance groups such as Camp Migizi and the Giniw Collective. 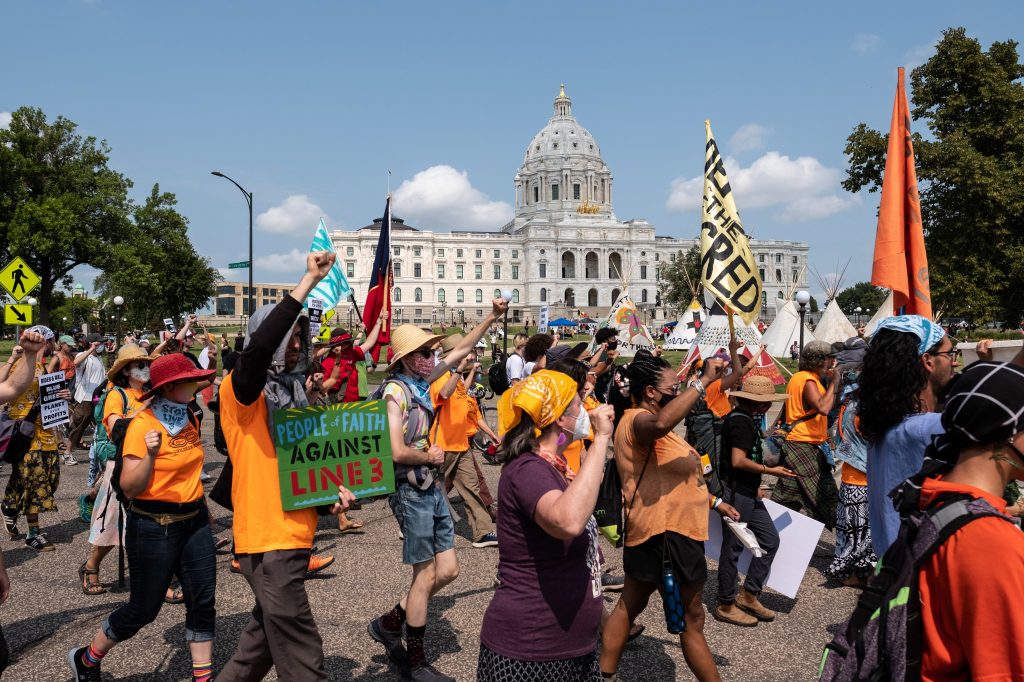 A SOURCE WHO had access to information about the ODOT system, who asked for anonymity, said they shared the material with The Intercept out of concern that Ojibwe pipeline opponent Winona LaDuke had been named as a threat, alongside the nonprofit she founded, Honor the Earth.

The documents about ODOT reviewed by The Intercept don’t show how the system was used, but groups named in the documents, like LaDuke’s, often had run-ins with the company during the fight over Line 3.

Enbridge, for example, bought land near the headquarters of an Honor the Earth project — miles away from the company’s pipeline. After the purchase, Honor the Earth employees repeatedly spotted drones around the property, which LaDuke suspected were for keeping an eye on the group. “The drones were significant, the surveillance was very significant on our staff,” said LaDuke. After Line 3 was completed this past fall, LaDuke said Enbridge agreed to sell her the land. “The amount of trauma they have caused in our communities is significant,” she said.

How the company gathered intelligence to make its risk assessments is unclear. Public records obtained by The Intercept show that law enforcement shared intelligence on anti-pipeline organizing with Enbridge security, though no link has been established between the police intelligence and ODOT.

Enbridge did not respond to questions about the land purchase, use of drones, or use of law enforcement intelligence. “While we always respect the rights of people to peacefully protest, some actions taken by protestors have put people, communities, and the environment at risk,” said Kellner, the Enbridge spokesperson. “It’s our obligation to protect our workers as well as the communities we operate in and the environment, which means understanding and managing those risks in a manner consistent with our values, and state and federal law.”

The Minnesota permit that granted permission for the Line 3 pipeline barred Enbridge from utilizing “counterinsurgency tactics.” The Intercept previously reported on criticisms that Enbridge was conducting a corporate counterinsurgency in Minnesota.

Dunlap said the documents provide additional evidence that such tactics were used. He said, “It’s most certainly counterinsurgency.”