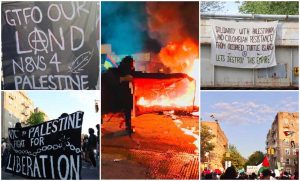 The fires of revolt has spread to Myanmar, Colombia, and across the occupied territories of Palestine, in the face of escalating state repression, murder and terror. In Myanmar, a military backed coup was launched on February 1st, pitting self-organized self-defense forces utilizing Hong Kong style black bloc tactics up against the heavily militarized armed forces.

According to Al Jazeera:

Worn down by bloody crackdowns and arbitrary arrests…a growing number…of people across the country [are] turning to armed resistance to overthrow military rule. Since the coup, millions have taken to the streets in peaceful protest, while a Civil Disobedience Movement has shut down infrastructure and public services. The military, meanwhile, has killed more than 800 civilians and more than 4,000 people remain in custody, according to the Assistance Association for Political Prisoners (AAPP), which is tracking arrests throughout the country.

In Colombia, riots, strikes, and mass protests kicked off as the state attempted to push through a post-pandemic tax-reform bill in an effort to implement austerity. A statement in solidarity the ongoing revolt in Colombia sent to It’s Going Down, reads:

Today marks [another] day of continuous mobilizations in Colombia. The tax reform proposed by the government was the spark that set off a broad, diverse movement that has risen up against a regime that attacks its people. The government has responded with military repression that has continued to escalate. The numbers of human rights violations are alarming: in Cali, the Temblores organization (which maintains the most complete national figures) has confirmed 35 people murdered as of May 10. In the vast majority of cases, the police have been confirmed responsible. 130 people have been disappeared and still not found.

On May 9, a group of armed civilians attacked an Indigenous movement caravan bringing food to Cali to support the mobilizations. 10 individuals from the caravan were shot and wounded, one of them gravely. Iván Duque’s neoliberal government has concentrated power in the hands of the far-Right. Democratic checks and balances don’t exist; they control many executive offices as well as a large portion of the judicial branch.The Colombian people, the poorest youths from the cities, Indigenous communities, workers, and peasants have risen up against a racist, murderous, mafioso regime. We have nothing to lose and we are only armed with dignity and just rage.

Now more than ever, we call on the international community to act in solidarity with us against the situation we are suffering through. Now is the time to break silence, now is the time to shout that in Colombia the government is killing people for protesting.

If those of us in the rest of the world stand by and do nothing, we can be sure that the same tactics will eventually be used against us.#Solidarity pic.twitter.com/cLM3Vq2zH6

Finally, a new wave of mass struggle and protest has begun across Palestine, as Israel continues to launch attacks into Gaza and mobs of far-Right Israeli settlers attack Palestinians, in a direct effort to engage in targeted ethnic-cleansing.

Prime Minister Benjamin Netanyahu authorized Israel’s heaviest airstrikes on Gaza City yesterday, insisting that the war will go on “as long as necessary” and that attacks on Gaza would continue in “full force.” Israel “wants to levy a heavy price” from Hamas, the Muslim Brotherhood group that rules Gaza, he added.

Netanyahu proceeds with his criminal war on a largely defenceless people with the full backing of US President Joe Biden, who has repeatedly declared for “Israel’s right to defend itself.” On Sunday the US, for the third time in a week, blocked the United Nations from issuing a toothless call for a cease-fire.

The attacks on Gaza overnight Sunday/Monday were more intense, covering a broader area and lasting longer than the bombardment the previous night in which 42 Palestinians were killed. A reported 54 fighter jets dropped 110 precision munitions on 35 targets in 20 minutes. Casualties in Gaza already stand at over 200, including two doctors, at least 35 women and 58 children, and about 1,300 wounded since Israel started its bombardment of the besieged enclave last Monday. Over 700 homes and 80 buildings have been destroyed, displacing 34,000 people who now lack the most basic necessities of life, including food. There have been 10 deaths in Israel, including two children and a soldier, killed in some 3,100 projectiles launched from Gaza.

Netanyahu and Israel’s political leadership have given the go ahead to his fascistic allies to send gangs of gun-toting settlers, right-wing football hooligans and ultranationalist bigots to the towns and cities where Palestinian citizens reside. The violence, which continued over the weekend in towns and cities across the country, including East Jerusalem, has led to the deaths of a dozen people and the arrest of nearly 1,000—850 of whom are Palestinians. In Lod, the authorities have declared a state of emergency, imposed a nighttime curfew and banned non-residents from entering the town after the killing of a Palestinian by a Jewish supremacist.

Across the world and so-called North America, people have taken to the streets in solidarity with this ongoing wave of revolt against repression – recognizing not only our connected struggles against policing, austerity, and racial apartheid, but the role of governments like the United States in propping up the states of Israel and Colombia through military aid and weapons sales.

What follows is a collection of recent actions from across North America which hopefully represents a small reflection of the activity happening in solidarity with ongoing struggles for freedom and autonomy across the world. The past week has shown in particular, the power of Palestinian youth, who took to the streets in the tens of thousands, shutting down the entrances of Israeli embassies, breaking windows in Montreal, blocking streets and bridges in New York, and clashing with far-Right reactionaries in Seattle. As the situation continues to unfold and more actions are planned, hopefully people can discover their collective power through direct action in new and exciting ways outside of the rally and march format.

San Francisco, CA: Mass rally and march in solidarity with Palestine in the working-class Mission District.

Sacramento, CA: Mass rally and march in solidarity with Palestine.

Yesterday at the #Nakba73 #FreePalaestine protest in Los Angeles, a CHP officer [Carroll, Badge#: 02246) picked up speed and ran over two protesters https://t.co/BmxyVUDXfE

Phoenix, AZ: Mass rally and march in solidarity with Palestine.

Protesters are marching down 17th Avenue on sidewalks chanting “Free free Palestine” – this looks like one of the largest protests I’ve seen in Phoenix since last year’s Black Lives Matter demonstrations. @azcentral pic.twitter.com/KCIYHfpzw2

Denver, CO: Mass rally and march in solidarity with Palestine.

banner drop in Lincoln, Nebraska. In English it says “1947-2021 Free Palestine” and in Arabic it says “This shall not pass (no pasaran)”

Signs are out, flags are waving, and the energy is high as Houston rallies for Palestine

Austin, TX: Mass rally and march in solidarity with Palestine.

Dallas, TX: Mass rally and march in solidarity with Palestine.

Chicago, IL: Mass rally and march in solidarity with Palestine.

Allentown, PA: Mass rally and march; Proud Boys on the scene but do not engage the crowd.

Toronto: Rally in solidarity with Palestine faces off against the far-Right Jewish Defense League (JDL).

Montreal: Mass march and rally in solidarity with Palestine marches on the Israeli consulate; windows broken out.