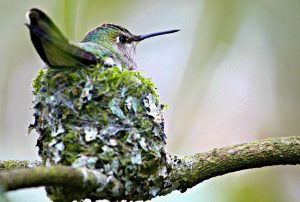 One of B.C.’s smallest birds is responsible for a four-month stop-work order on one of the federal government’s largest projects, the expansion of the Trans Mountain pipeline.

Anna’s hummingbirds are protected by Canada’s Migratory Bird Act, which says any work that could negatively affect the population has to be halted until nesting season is over. The order, issued by Environment and Climate Change Canada, was put forward after conservation officers saw the company felling a tree with an active hummingbird nest in it earlier this month.

The pipeline, originally built in the 1950s, was taken over by Texas’ Kinder Morgan in 2015, which then made plans to triple the exports of the existing operation, upping production to up to 890,000 barrels each day flowing from Alberta to the coast of B.C. The federal government purchased the pipeline in 2018 for $4.5 billion. The Trans Mountain expansion (TMX) is projected to cost $12.6 billion.

Trans Mountain says the order will not delay the projected completion date of December 2022 and would not answer whether the stop-work order would increase project costs. However Protect the Planet Stop TMX, a group advocating against the project, says an earlier affidavit by a company executive suggests it will.

“Trans Mountain said in an affidavit (pages 18 to 20) that tree clearing in the area had to be completed prior to August 1 to allow access to the streams. If that didn’t happen (which now it can’t) Trans Mountain will miss its 2021 window for watercourse crossing, its 2022 window for hydrotesting and its 2022 in-service date,” said the group.

Christine Turing speaks at a press conference hosted by the Community Nest Finding Network on April 26. Photo courtesy of the Wilderness Committee

“Pipeline work at this location must now wait until next year, 2022. The delay comes at a cost of at least $100 million per month of delay past the in-service date, according to Trans Mountain.”

The stop-work order does not apply to the full 1,500 kilometres of pipeline, but rather to about 1,000 metres along the Brunette River in Burnaby.

Eugene Kung, staff lawyer at West Coast Environmental Law, agreed the order will result in significant losses for the company.

One of B.C.’s smallest birds is responsible for a four-month stop-work order on one of the federal government’s largest projects, the expansion of the Trans Mountain pipeline. #TMX

“This is another costly example of Trans Mountain’s disregard for the rules that has happened far too often throughout construction. It was only because of the incredible work of local residents that they were caught red-handed,” said Kung.

“With every delay, the total cost to taxpayers balloons and the project falls further outside the public interest. We have not seen a cost update in more than a year, but it’s easy to estimate the cost being closer to $20 billion today.”

A group called the Community Nest Finding Network (CNFN), which alerted the feds with concerns about TMX violating the Migratory Bird Act, found eight active nests on site but says there are many more along the pipeline route.

“Starting in about mid-February, spring migrations start — nesting can start that early. And it goes until the mid or the end of August … in the last 30 years, we’ve lost 70 per cent of our birds,” said Donna Clark, co-founder of CNFN and former director of Wild Bird Trust of BC.

“These beautiful mama Anna hummingbirds, these little birds that have stopped the pipeline, they are what we call in English the canaries in the coal mine.”

Sara Ross, also founder of the CNFN, said the group has been reporting its nest findings directly to TMX as well as the government. However, Ross says the line gets blurred when the owner of the pipeline is also the regulator.

“It’s like if we were the bank robber and the police,” she said.

“So that’s why groups like ours are imperative. It’s the reason why we’re doing this work, because no one else is.”

Both the cities of Vancouver and Burnaby are opposed to the pipeline, as are hundreds of First Nations.

Kukpi7 Judy Wilson, executive board member of the Union of B.C. Indian Chiefs, was at an April 26 press conference announcing the stop-work order. She said the government needs to invest in renewable energy rather than fossil fuels. She pointed to the hummingbird as a fitting mascot for the order.

“It is very symbolic that a tiny hummingbird has stopped local construction of this pipeline. At the same time, it is not entirely surprising, either,” she said.