Following President Joe Biden’s executive order to revoke the permit for the Keystone XL pipeline, activists and organizers are escalating calls for similar actions to shutter other major pipelines. They are addressing projects like Enbridge’s Line 3 tar sands pipeline and the Dakota Access pipeline, which run through and devastate Indigenous lands and lives, threatening water sources and our collective futures. Just this month, celebrities joined Indigenous leaders and environmentalists in urging the president to shut down the Dakota Access pipeline.

While Biden’s action on Keystone XL and court rulings over Dakota Access constitute victories for the Indigenous-led climate movement, water protectors who stood on the frontlines of these battles continue to face grave repression and punitive consequences from the government.

A full four years since the powerful Oceti Sakowin prayer camp at Standing Rock fought the pipeline’s construction, Indigenous water protector Steve Martinez was jailed this month in relation to his presence there — although he has not been convicted or even accused of a criminal offense. In no uncertain terms, Martinez’s current detention by federal authorities makes clear that state violence against Indigenous climate struggle is far from a thing of the past. 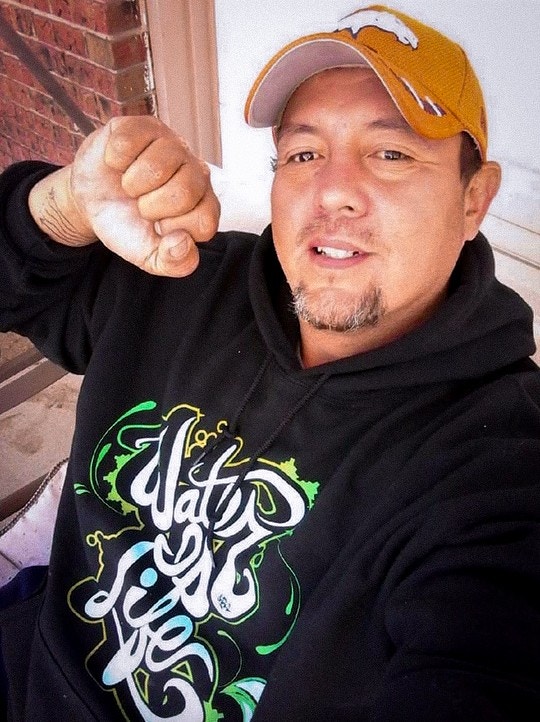 A photograph of Steve Martinez as provided by his legal team.

Martinez is being held for his refusal to give testimony before a federal grand jury, a notoriously secretive judicial process that has historically been weaponized against activist communities. Grand jury resisters like Martinez are detained under a torturous peculiarity in U.S. law that permits a judge to hold a person in contempt of court if they refuse to cooperate with a grand jury subpoena. The grand jury resister can then be imprisoned with the express purpose of coercing testimony. If it can be shown that the coercion will not work, and the imprisonment is thus punitive, rather than coercive, such incarceration becomes illegal. It was for grand jury resistance that the incoercible Chelsea Manning was also recently imprisoned for over a year.

In Martinez’s case, the grand jury appears to fit within a pattern of the state using such processes to browbeat activists engaged in struggle. The grand jury ostensibly revolves around a 2016 incident in which another water protector at Standing Rock, Sophia Wilansky, was seriously injured; Wilansky has claimed that the police were responsible. Though grand juries are opaque, the authorities seem to have convened this latest assembly in an effort to prove a fanciful theory that the injury was caused by water protectors themselves — perhaps even the injured young woman. This is the context of Martinez’s resistance.

“The state should not be intimidating people and trying to blame us for harm they caused,” Martinez said in a statement released by supporters. “I didn’t want to lose my freedom, but they are not going to break me.”

The U.S. is near unique among nations for its continued use of grand juries. The U.N. Special Rapporteur for Torture last year suggested that coercive confinement to force people to testify against their conscience meets the definitional criteria of torture and violates international human rights law. For over a century in the U.S., federal grand juries have been used to investigate and intimidate social movements — from the late-19th-century labor movements, to the Puerto Rican independence fighters and black liberationists of the last century, to environmentalists, anarchists, and Indigenous activists more recently. The grand jury before which Martinez has been called to testify appears particularly suspect.

While the black-box nature of such proceedings permits the government dangerous secrecy over its prosecutorial intents, this grand jury ostensibly relates to the investigation of events leading to the maiming of Wilansky in November 2016. Wilanksy almost lost her arm when she was struck by a high-impact munition during a standoff with police during the Standing Rock protests. Martinez, who had access to a car and was near the scene, drove a bleeding Wilansky, bone and tissue protruding from her mutilated arm, to meet an ambulance at a nearby casino.

Wilansky and those present with her that night insist that her grave injury was caused by a concussion grenade lobbed by a sheriff’s deputy of the Morton County, North Dakota, sheriff’s office, whose officers were attacking water protectors that night. Morton County has continuously denied accusations of excessive force, blaming the water protectors, and even Wilansky herself, for her injury. The county claims that it was a protester’s propane canister that exploded and ripped through Wilansky’s arm, despite the fact that medical reports deemed that the injuries are not consistent with a propane tank explosion.

Prosecutors say that the delay is due to their previous inability to locate Martinez — a preposterous claim, given that the water protector has since 2017 primarily been living in the small city of Bismarck, North Dakota, a town of just 70,000, where the federal court is small enough to share a building with the post office.

It is “inherently suspect that they” — the federal government — “expect us to buy … that they are suddenly interested in pursuing a criminal investigation.”

This grand jury’s timing is all the more suspect: It was assembled hurriedly just four days after a significant ruling in the civil case brought by Wilansky against Morton County. A judge ordered that the parties involved in the civil case could subpoena federal law enforcement to hand over shrapnel taken from Wilansky’s arm during her eight-hour surgery. FBI agents visited Wilansky in the hospital and seized both shrapnel and items of the young woman’s clothing. Ever since, Wilansky has been fighting to have the items returned; the shrapnel is expected to serve as dispositive evidence that she was struck by a law enforcement grenade.

Since 2018, attorneys for Wilansky have expressed concerns that the FBI may have damaged or even lost the evidence. The government, meanwhile, justified their refusal to return the property with reference to an ongoing criminal investigation, although no arrests were made, and indeed no available evidence suggests that anyone but law enforcement bears responsibility for her injuries. In calling a grand jury now, the government has grounds to claim that it cannot hand over the shrapnel for the civil case, as it requires the evidence for its own federal investigations.

Moira Meltzer-Cohen, one of the attorneys representing Martinez, who has defended a number of previous grand jury resisters, including Manning, told me that it is “inherently suspect that they” — the federal government — “expect us to buy that, after four years, after voluntarily withdrawing one subpoena, that they are suddenly interested in pursuing a criminal investigation, just four days after they are put on notice that they may now, finally, be compelled to hand over the critical evidence in this matter.”

“There is a long history of grand juries being used to intimidate politically disfavored groups, from abolitionists to union organizers, anti-war advocates, and civil rights activists,” Meltzer-Cohen said in a separate statement. “This grand jury, which criminalizes movements for native sovereignty and environmental justice, is one more instance of such abuse.”

Given the secretive nature of federal grand jury proceedings, the government is under no obligation to prove the legitimacy of its actions. Martinez, meanwhile, is caged as collateral damage: yet another victim of this country’s unending violence against Indigenous life. He can be held for the length of the grand jury, up to 18 months. If the overseeing judge agrees with what is clearly the case — that Martinez will not be coerced to speak — he should by law be immediately released.

“Standing Rock may have been four years ago, but it’s not over.”

Martinez’s lawyers are challenging his incarceration on both procedural terms and by stressing that it is already punitive and thus illegal. The contempt statute governing grand jury witness incarceration explicitly states that coercive imprisonment must be at a “suitable place.” In the midst of a global pandemic in which prisons serve as petri dishes and incarcerated people are contracting Covid-19 and dying in vastly disproportionate numbers, the excessively punitive nature of any imprisonment is undeniable. Martinez has a number of health issues that place him at high risk for complications were he to contract Covid-19, including hypertension and diabetes. Numerous incarcerated individuals with similar health issues who have been convicted of crimes have been given compassionate release due to the coronavirus pandemic. Martinez’s continued imprisonment, without criminal charge or conviction, is, as Meltzer-Cohen put it, “definitionally punitive.”

Anyone who cares about the fight for life against environmental devastation should recognize the necessary centrality of Indigenous-led struggle. Appeals to the Biden administration for robust climate policies cannot overlook those who have been, and remain, on the very frontlines: the water protectors like Martinez who continue to face and fight repression.

“Standing Rock may have been four years ago, but it’s not over,” said Martinez’s partner, Leta Killer, an Oglala Lakota and Arikara water protector, in a video rallying supporters. Killer, who met Martinez at the Oceti Sakowin camp, added in a statement: “Feds are still grasping straws trying not to be held accountable for the terrible things law enforcement did to peaceful, prayerful Water Protectors.”