Bring that sucker down without anyone getting hurt. 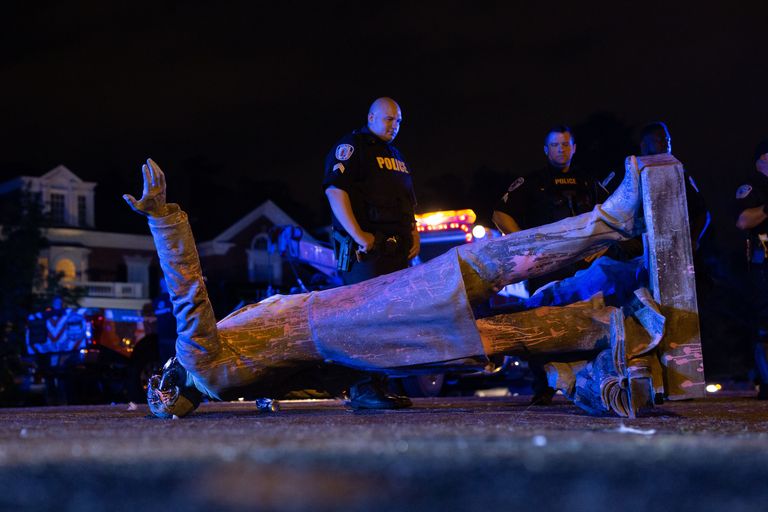 It hasn’t been a great past few weeks for statues.

From Bristol, England to Birmingham, Alabama, people all over the world have been grappling with the legacy of racism by tossing their grappling hooks around the heads of problematic monuments.

Should you happen to find yourself near a statue that you decide you no longer like, we asked scientists for the best, safest ways to bring it to the ground without anyone getting hurt—except, of course, for the inanimate racist who’s been dead for a century anyway.

⚠️This article is being presented only to describe the physics and mechanics of removing statues, in light of national attention being drawn to the removal of Confederate monuments and statues. Popular Mechanics is not encouraging anyone to remove any statues. There is a risk of injury whenever you try to remove or destroy a statue, even if you were to apply information presented in this article.

The force required to pull down a statue isn’t as great as you think, says mechanical engineer Scott Holland. Most statues are bronze, using an alloy of 90 percent copper and 10 percent tin and a maximum thickness of 3/16 of an inch. The Statue of Liberty’s copper sheeting is only 3/32 of an inch thick, for comparison.

Holland says your average statue of a person tops out at around 3,500 pounds. (FYI: A horse statue is approximately 7,000 pounds.) Meanwhile, the OSHA-mandated upper force limit for horizontal pulling per person is 50 pounds of force—“but that’s for working every day,” he says, “so you could probably do twice that.”

At 100 pounds of force, then, we’re talking about a 35-person job to drag the statue, Holland says. But to pull it down, “let’s assume twice the force—so you’ll need twice as many people.” So before you start toppling, you’d better recruit 70 buddies with a bit of muscle.

Now that you have your crew, you’ll need the right tools. Holland suggests grabbing a few 4×4 recovery straps, which can be rated to over 32,000 pounds and are far less cumbersome than a chain. Once you’re properly equipped, you want to get leverage, Holland says, “so you need to get the straps around the head or the neck [of the statue].”

To break the statue from its base, split into two teams on either side and work in a back-and-forth motion. Most statues are attached to the base by 2 to 3 feet of rebar, so you’ll actually be breaking it at the bronze above the rebar—not the rebar itself, says Holland. (That’s steel.) “When the U.S. took down that statue of Saddam Hussein, you can see it folds at that spot where the rebar is in the base of it,” he says. 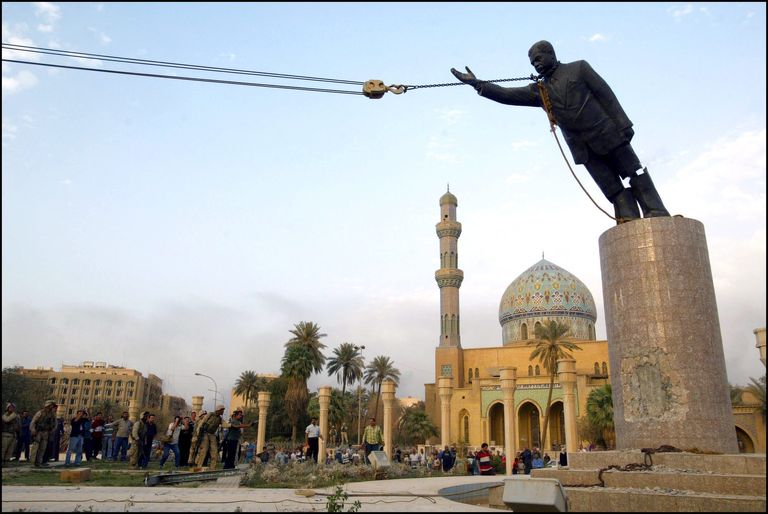 Let’s say you can’t find 70 friends. If you still want to attempt this with a smaller removal squad, you have to weaken the monument itself. That’s where temperature comes in.

Yield strength changes a lot with temperature. A 90 percent copper/10 percent tin statue, for example, will have a yield strength at room temperature of 31.4 megapascals—that’s compared to 275 MPa for 6061 aluminum—“so structurally,” Holland says, “it’s not hard to break.” 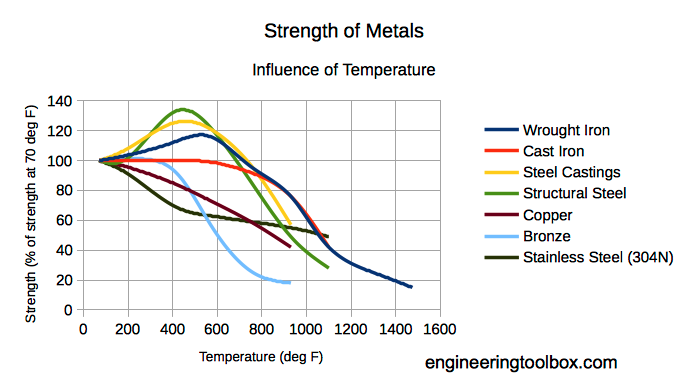 With 35 people, you need to cut the statue’s yield strength in half by heating it up. And how do you do that? For a bronze statue, your target temperature is around 450 degrees Celsius, or 842 degrees Fahrenheit. “You could use a butane torch,” says Holland, “but it would be much quicker with a propane torch. Those burn hotter. You’ll be there for 15 to 20 minutes, but it’s a lot easier.”

Just make sure you use the proper protective equipment and look to see that nobody is underneath the statue when it falls. That means using a long rope to make sure the first person on the rope is farther away from the statue than the statue is tall. Use this handy Pythagorean triangle calculator to help figure that out. 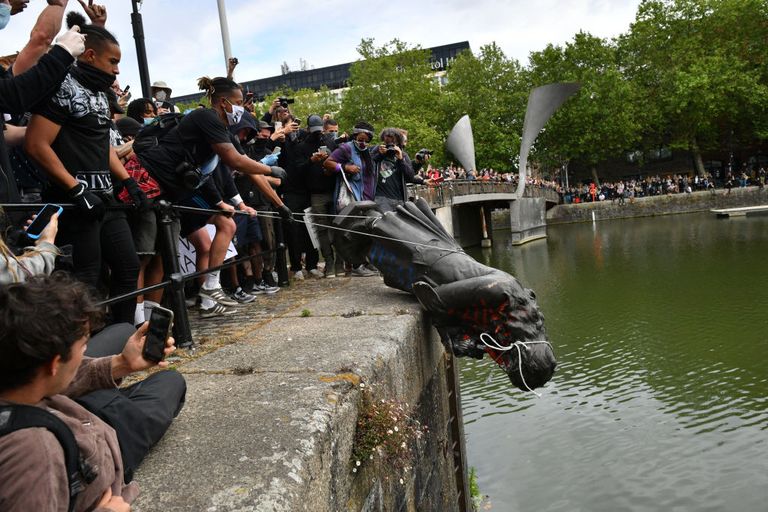 Maybe you’re operating with an even smaller team—or toppling the statue all by yourself. In that case, your best bet is melting the damn thing. So let’s make a thermite reaction.

“The formula is very simple,” says Chris Harrison, a chemistry professor at San Diego State University. “It’s 3:1 by mass of rust and aluminum powder. You mix those together and use a piece of magnesium to use as a high temperature fuse. And if you don’t have one, you could use a sparkler.”

The melting point of the hypothetical bronze statue is 1,742 degrees Fahrenheit, but even if you come across a racist cast in copper (melting point: 1,984 degrees), you can still easily melt both with thermite, as it burns at 2,500 degrees.

While thermite might burn nearly half as hot as the sun, it isn’t explosive. “You could pack the thermite around [the statue’s] ankles using a plastic or metal bucket with the base removed,” Harrison says. “You could invert the halves of the bucket and place them on either side of the feet, and then pour in the thermite, packing it down as best as possible. The more open space there is, the less efficient the reaction will be.” 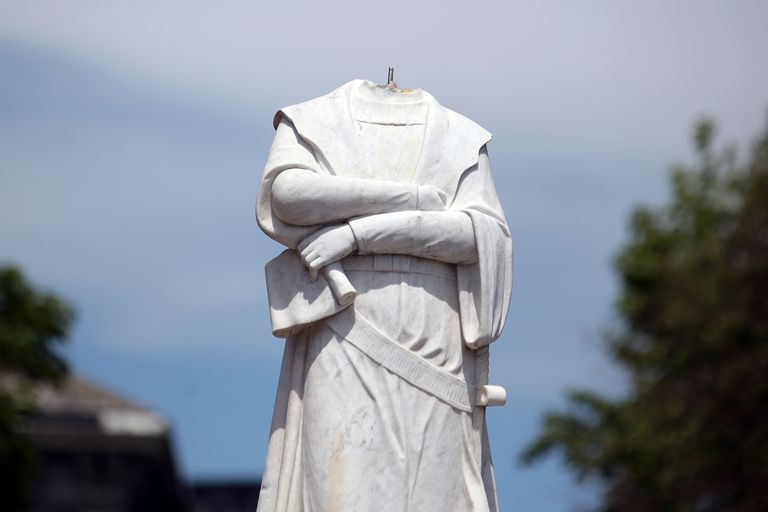 A statue depicting Christopher Columbus is seen with its head removed on June 10, 2020 in Boston.
Tim Bradbury/ Getty Images

Once you melt the statue’s ankles, it should just fall over, Harrison says, as that metal likely supports everything above it.

If you’re out of sparklers, snag some liquid nitrogen from a distributor like Airgas or Praxair. Then, drill a hole in the statue and pour the nitrogen inside to shatter the ankles.

Or you could combine the two, says Harrison. “If the liquid nitrogen is above the height of the thermite, you’ll have some very cold metal, right next to some metal getting very hot,” he says. “This should induce a lot of thermal strain, likely causing the metal to crack in that region.”

Just keep that hole way above your thermite, or you’ll be spraying incredibly hot molten metal into the air.

And here’s a fun bonus: The liquid nitrogen will quickly turn to a gas and come shooting out of that hole you drilled, says Harrison, which will almost certainly cause a high-pitched squeal. “One could imagine it sounding something like the sound a confederate general would make if their feet were on fire.”