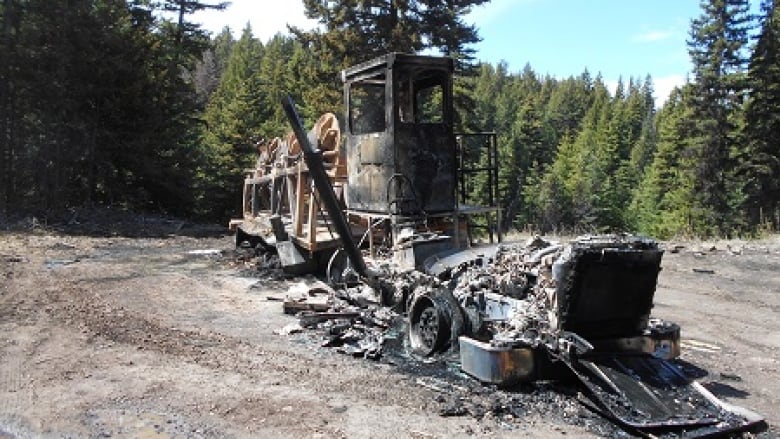 Merritt RCMP are investigating after a piece of heavy equipment on a Trans Mountain pipeline expansion worksite near Merritt, B.C., was the target of vandalism. (RCMP)

The Mounties are investigating after a piece of heavy equipment on a Trans Mountain pipeline expansion worksite in British Columbia was found burned out by workers returning after the long weekend.

The machine, a Peterbuilt rope truck, was being used to help string wire to build a transmission line to a pump station as infrastructure for the pipeline.

The incident happened in the bush between Kingvale and Aspen Grove near Merritt, B.C.

RCMP said in a release that investigators are trying to locate a group of people who were camping in the area on the weekend. 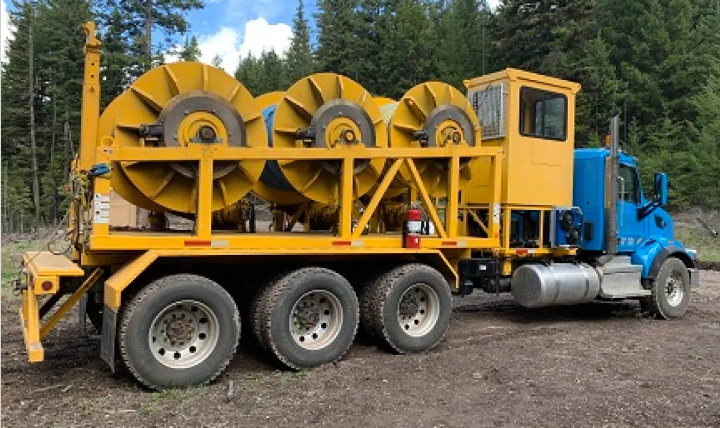 RCMP said the truck, seen in this photo before it was set ablaze, was previously targeted by vandals. (RCMP)

Police are also asking motorists who might have travelled through the area of Highway 5A and Tillery Road, outside Merritt, on Monday evening into the early morning hours of Tuesday, to review their dash camera footage and contact police.

The same vehicle was targeted in an act of mischief and a theft of fuel earlier on the weekend, RCMP said.

Construction has been ramping up on the expansion of the Trans Mountain oil export pipeline, including the installation of pipe in British Columbia, where opposition to the project has been loudest.

The multibillion dollar project is owned by the federal government and will transport oil from Edmonton to the Vancouver area.

“This kind of vandalism happens and it’s unfortunate. But the important thing is that nobody was hurt, and that … they have secured a new piece of equipment and construction will continue,” said Trans Mountain spokesperson Ali Hounsell.