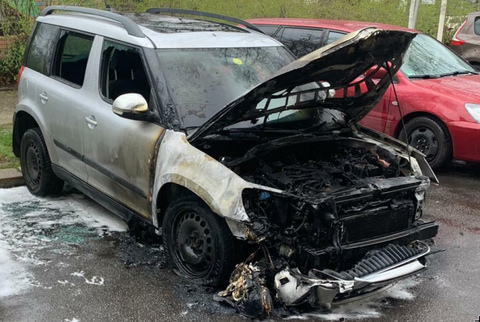 During the night of March 9-10, 2020 in Berlin, several attacks targeted officials and a collaborator of the far-right AfD party. These attacks are an anti-fascist response after the racist bombing in Hanau three weeks ago, which left several people dead.

At around 2:00 am, the car of Berlin’s AfD chief Nicolaus Fest was set on fire in the Charlottenburg-Wilmersdorf district. It only took a few minutes for it to ignite…

Then in the Reinickendorf district of Eichborndamm, a coffee shop was attacked. Its windows were broken and its facade painted. The shop, called the ‘Maestral,’ is a well-known haunt of the AfD (Berlin) regional section. In addition to being regularly frequented by activists of the fascist party, this bar often serves as a meeting place and events for “Flügel” fascists around Björn Höcke, as well as those of “Young alternatives (young section of the AfD) who have strong connections with the identity movement and nationalist student bodies.

During the same night, Gottfried Curio’s home in Knesesbeckstraße (in Lichterfelde) was targeted. Curio is a spokesperson for the AfD section of the Bundestag on domestic policy. The windows of the semi-detached house were smashed, bottles filled with paint landed on the facade and inside. The inscription “Hanau: Curio, you are the murderer! It has been highlighted for the neighborhood. In recent weeks, he has distinguished himself in a speech at the Bundestag by mocking the victims of Hanau [fascist attack which targeted shisha bars on February 19, 2020 in Hanau].

Curio is an early member of the far-right party and is on the steering committee of the AfD section of the Steglitz-Zehlendorf district. In 2016, he was elected to the Berlin Chamber of Deputies and took the opportunity to spread his racism.