Reflections from the EF! coal plant blockade during the Tampa RNC 2012

As the orgy of public relations nightmares for current and aspiring politicians comes to a crescendo of cacophony, nauseating and near impossible to escape, I find myself staying sane by reminiscing on my favorite direct action memories which stand as stark contrasts to the farce of electoral politics. Of course there’s the WTO in Seattle, and the forest defense campaigns of the Northwest, World Bank summits in DC, the anti-NAFTA I-69 roadblocks in Indiana, the FTAA in Miami, the initial days of Occupy Wall Street, the general strikes in Athens… And contrary to my initial expectations, I’m going to have to add this Summer’s RNC in Tampa to that list. Many of both the seasoned and newbie protestors who experienced the convention may not share the positive, uplifting experience. But I would guess that’s because they missed out on the Earth First! action at the end of the week. I think it’s a story worth telling. So, here’s my version, hyperlinks ‘n all.

I have to say, I’m glad I heeded Clinton Tyree’s call for Everglades Earth First! to join with the RNC protests in Tampa Bay this Summer. Even if the whole shindig would have gotten cancelled for a hurricane, I’d have had no regrets. I came ready to strap myself alongside Skink (Tyree’s forest name) and face that storm head-on from the peak of the Sunshine Skyway bridge.

But that moment never came. For better or worse, Tampa was not clobbered by Isaac the Avenger. And I was left antsy to strap myself to something… Could a u-lock on a gypsum struck from the local coal plant do?

After four days of practically non-stop marches in Downtown Tampa and St. Pete, the mobilization’s low energy level was waning further still. While enthusiasm was high, our numbers and energy in the streets were low. The redundancy of marching and rallying amidst swarms of police was getting old, stagnant. I know, you’re shocked by this revelation. Things clearly needed to be shaken up a bit. Luckily I was amidst a handful of other Earth First!ers who were sharing the feeling (ok, so maybe the hand wasn’t quite full). We decided to get busy, and make our small numbers count.

Aug 30 was the day called by ResistRNC.org for environmental actions, and within 24 hours of that day, we managed to brainstorm a list of possible targets and scout them enough to make a solid decision.

But all those details are a subject for a longer story at a later date (one perhaps I’ll try to get published in EF! Journal someday), or at least a good workshop outline on the art and magic of pulling an action out of your ass.

Finally, after much deliberations, we picked a site—A damn good one—and we kept our lips damn tight about it, and, dammit, I have no regrets about that. Sometimes that’s just how it’s got to be.

“Peacekeepers” in Tampa during the RNC

As the wise sage at the ResistRNC.org website had advised: “Those skilled in war bring the enemy to the field of battle and are not brought there by him.”  Or maybe that was Sun Tzu’s ancient text on military strategy. Regardless, it’s a good point. Whether you admit it or not, you are in the midst of a long war, and Tampa was certainly a warzone.

We planned our blockade, quickly and brilliantly. We would strike at the heart of the machine. We would take on the energy empire, directly. Not at their corporate headquarters, not in some “free speech zone” in front of a fancy social event. We wanted to interrupt the fuel supply that keeps an all-around toxic system expanding. 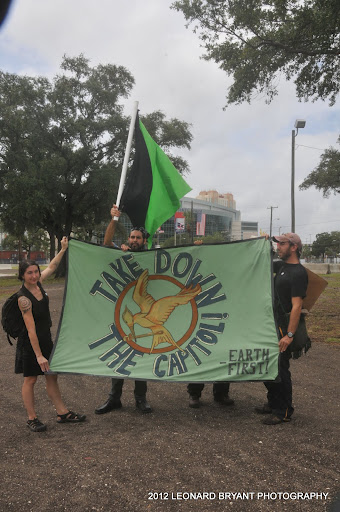 Being that we started the week with a shout-out to the coming rebellion in District 12, proudly flying our Hunger Games-themed banner in front of the convention center, it only seemed right to manifest our solidarity with the Mockingjay’s rebellion here at the Capitol-esque RNC by tackling old King Coal. (Don’t get it? Don’t stay in the dark. Read the books, or my review of them.)

TECO, Tampa Electric Company, would provide the perfect point of intervention. The word was spread by mouth, a plan was made safely and inclusively (not perfectly.. but not far from it), meetings and action prep took place filling most of the waking hours. Some slept briefly, other planned and prepped straight through the night.

And by the next afternoon, coal trucks would be backed up by the dozen, about 30 minutes away from the downtown spectacle and mere hours before Romney, the biggest industry-booster candidate the US has seen in decades, would take the stage to accept the nomination.

We covered both sides of the road which accessed the truck entrances for the plant. We knew that despite our blockade-lockdowns being smaller than the road’s width, they were just big enough that the police would soon be blocking the road for us in attempt to cut off the lock boxes. And we bought just enough time for the buses from Occupy Wall Street to roll up and unload another seventy-some people into the chaos.

In a dreamworld, our blockade would hold long enough for the coal supply to dry up, just in time for a nice rolling blackout to rain on the RNC’s charade…

And it might have happened too. The police were on some strange mission to avoid conflict and come out as the heroes of the day, basically refusing to arrest anyone in the blockade. This could have been because the liberal-democrat-lesbian Tampa chief of police thinks the Republicans are assholes (and all but said it), or it also could just as easily be a decision by law enforcement strategists to try and keep the moral high ground, while not blowing through their budget on civil liberties lawsuits. Regardless, we should be able to respond accordingly and push further when that sort of opportunity arises. A hard lesson learned is that it’s generally in our favor to keep the initiative in our court, strategically escalating confrontations on our own terms, even when opportunity for negotiations with the cops open up unexpectedly.

Sure, it’s easier said than done, but worth being said.

Regardless of who wins the election in a few days, next time we’ll be better prepared (remember, Obama supports the Tar Sands pipeline through East Texas, drone attacks and Wall Street bailouts.) We can see the political process as the sham it is, and still act on the fact that the spectacle surrounding it is a strategic place to engage the system. Inauguration actions, anyone?!

Check out Everglades Earth First!’s press release, and some other videos