Only 10 people turned out for the first protest since peace talks fell over last week.

The centre’s Jenny Webber says old growth ecosystems have been lost to provide the company with timber.

She says with a logging moratorium on 430,000 hectares due to be lifted on Wednesday, protesters will rally even though they are tired.

“I certainly think people are fatigued by the issue sadly,” she said.

“I think people have been intimated by the constant calls from people saying were not allowed to be protesting anymore.”

Ta Ann has mills in Smithton and Huonville says it is now reviewing its state operations following the peace talk failure.

In a statement after the protest, the company said it remained committed to an outcome from the process.

The company remained committed to the principles of the talks and encouraged all the parties to seek a solution.

Blast from the Past 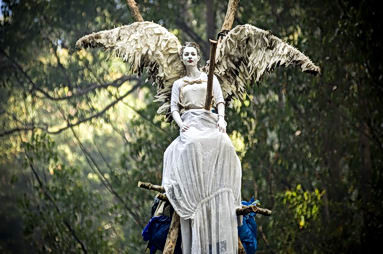 It was taken in 2007 by the same group featured above. The Tasmania timber wars have been going on since the EF! movement began, and before that, too! Stay tuned to see what comes next!