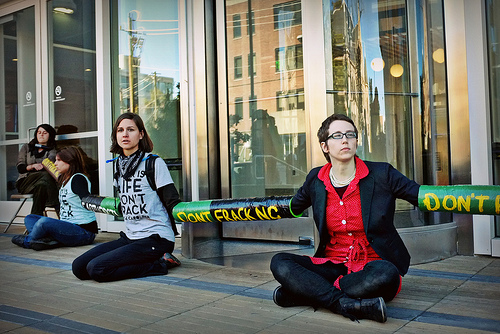 Seven members of Croatan Earth First! and participants from our Piedmont Direct Action Camp locked together today, barricading the front of North Carolina’s Department of Environment and Natural Resources (DENR) building in downtown Raleigh. Providing physical, active resistance against fracking in North Carolina, CEF! has chosen DENR for an action as they are responsible for helping legalize fracking, and will be responsible for regulating it. They have also hired a corrupt Mining and Energy Commission board, which includes people with vested interests in hydraulic fracturing occuring. We are letting them know that this farce won’t stand! No compromise in defense of Mother Earth!

In addition, a sizeable demonstration is being held around the lock down, with several large banners, signs, literature, etc. Police actively cleared the site, and have closed off the road, labeling the entire block a crime scene. Press was being prevented from approaching the site.  In negotiation made with the police, press was allowed inside to do interviews and take photos if the blockaders agreed to unlock later. The protesters decided to unlock as a tactical decision to walk away without arrests and save our legal funds for future events.

Livestream of the whole event.