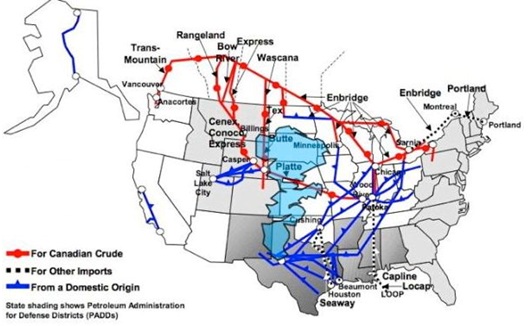 VICTORIA _ Opponents of the Northern Gateway pipeline gathered Sunday for a protest school of sorts, in preparation for what they hope will be a massive show of environmental force on Monday.

An estimated 300 protesters, who organizers say are willing to risk arrest, attended the day-long protest boot camp being offered by Defend Our Coast, the coalition of environmental groups behind the sit-in planned Monday on the grounds of the provincial legislature in Victoria.

Spokesman Peter McHugh said the group hopes at least a thousand people will come out to show the provincial government that British Columbia voters do not want a pipeline or tanker port proposed by Calgary-based Enbridge Inc (TSX:ENB).

McHugh said protesters do not take lightly the prospect of civil disobedience, and they hope the protest is peaceful.

“It’s not our first choice as Canadians, but when the government doesn’t listen, and the people we’ve elected are not representing the people that elected them, civil disobedience is a tactic,” he said.

The provincial government is not in session, and no one from Victoria police was available to discuss their plans for the protest.

About 4,500 people have signed an online pledge on the group’s website promising support for the protest in Victoria and another provincewide protest is planned for Wednesday at MLA offices in 55 communities throughout the province.

For some, the Northern Gateway pipeline has become a lightning rod for discontent not only with the expansion of the Alberta oil sands, but with the provincial Liberal government and the federal Conservative government that has made sweeping changes to environmental laws.

The protests have garnered support from unions including the Communications, Energy and Paperworkers Union, the Canadian Auto Workers, the B.C. Teacher’s Federation, the Canadian Union of Public Employees and the United Fishermen and Allied Workers’ Union.

They have the backing of Greenpeace, ForestEthics, the Council of Canadians and several First Nations, and have been endorsed by high-profile activists such as David Suzuki and Stephen Lewis. Celebrity supporters include filmmaker Michael Moore, singers Sarah Harmer and Dan Mangan, and actors Ellen Page, Mark Ruffalo and Darryl Hannah.

The $6-billion pipeline project would carry diluted bitumen from the Alberta oilsands through northern B.C. to a tanker port in Kitimat in one pipe, and condensate from Kitimat east to Alberta in another.

Enbridge has estimated that opening up Asian markets to Canadian oil would boost Canada’s GDP by $270 billion over 30 years, and would generate $81 billion in direct and indirect revenues to the federal and provincial governments. Of that, B.C. would receive about $6 billion, while Ottawa would receive about $36 billion and Alberta $32 billion.

Environmental review hearings in Prince George, B.C., have been adjourned for one week, and will resume Oct. 29.

The three-member panel review panel has until the end of next year to complete its report and _ if approved _Enbridge’s most recent projections have the pipeline up and running in 2018.

George Hoberg was one of the protesters attending boot camp on Sunday.

“I believe we have a climate emergency and politics, as usual, is not working so we need to engage in direct action and other forms of disruption to ensure politicians understand the importance of this issue to citizens and to future generations,” said the professor in the faculty of forestry at the University of British Columbia.

“I want politicians to wake up and understand that there will be serious political consequences if they push these projects through.”

Grand Chief Stewart Phillip, president of the Union of B.C. Indian Chiefs, said he will be in Victoria on Monday.

“The Harper Government has clearly demonstrated that it is only their blatant sell-out to industry agenda that matters,” Phillip said in a statement.

He said environmental laws “are being systematically bulldozed aside in Parliament to the delight and benefit of tar sands development projects such as the Northern Gateway Enbridge project and the expansion of the Kinder-Morgan pipeline.”

Kinder Morgan has proposed its own $4.1-billion Trans Mountain project that would expand an existing pipeline from Alberta to Vancouver.