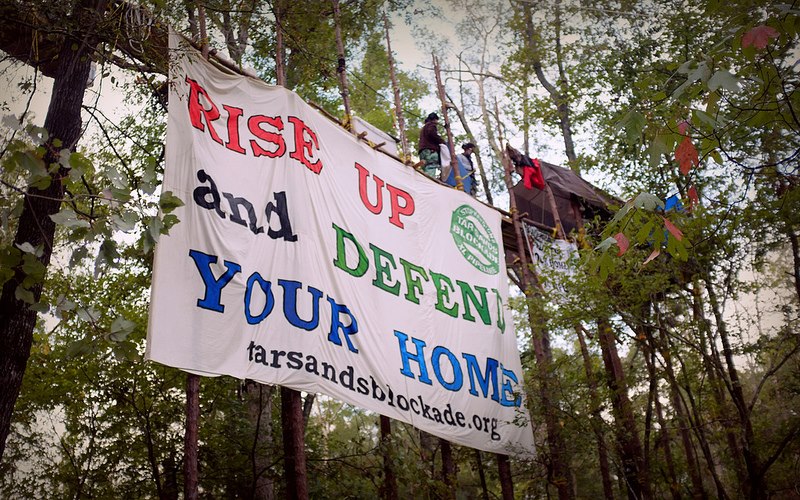 “Rise Up and Defend Your Home,” looks like there’s a new banner up at the Tar Sands Tree-sit!

While Transcanada strongly believes that there is “overwhelming support” to build this disasterous pipeline, the Earth First! Newswire is committed to keeping the international community of readers and eco-warriors posted on all of the amazing resistance that is helping prevent Alberta Tar Sands from traveling into the US. the following two paragraphs are copied directly from the Transcanada website.

TransCanada is fully committed to the construction of the 1,897-km (1,179-mile) Keystone XL Pipeline from Hardisty, Alberta to Steele City, Nebraska. We will re-apply for a Presidential Permit and expect a new application to be processed in an expedited manner, making use of the exhaustive record compiled over the past three plus years of regulatory review to allow for an in-service date of 2015. TransCanada anticipates approval of the Presidential Permit application – which is required as the pipeline will cross the Canada/U.S. border – in the first quarter of 2013, after which construction will quickly begin.

TransCanada continues to believe in the value of Keystone XL due to the overwhelming support the project has received from American and Canadian producers and U.S. refiners who signed 17 to 18 year contracts to ship over hundreds of thousands of barrels of oil per day to meet the needs of American consumers.

In late June the Obama administration, moving swiftly on the president’s promise to expedite the southernmost portion of the disputed Keystone XL pipeline, has granted construction permits for part of the route passing through TexasOn August 9th, in Livingston Texas. On August 19th the Transcanada corporation officially began construction of the Keystone XL pipeline which will carry poisonous tar sands from Alberta Canada to the Gulf of Mexico despite overwhelming opposition from landowners and concerned residents, but a broad coalition called the Tar Sands Blockade is organizing to stop the violence and defend our homes in the path of this toxic tar sands pipeline.

Transcanada surveyors were also prevented from preparing for construction when landowners and community members turned them away north of Winnsboro at an ongoing vigil to protect a local wine vinyard which will be destroyed if construction begins. Read on for so much more.Watch this video for inspiration to join us in Texas or donate to support our work! [youtube http://www.youtube.com/watch?v=s06IJDewOGI&w=560&h=315]

Romney is committed to approving the Keystone XL Pipeline  on Day 1 of taking office, if elected. Though Obama denied the Keystone Pipeline permits submitted for a proposed route in January of this year, he never ruled out approving or denying the entire pipeline, and has ultimately granted a permit to begin the destruction in Texas. Last year, he ordered a new study to be done on the risks presented by it, and the State Department is again evaluating a route proposed by TransCanada, the pipeline’s owner and operator.

In early 2011 Chairman of the Western Hemisphere Subcommittee Congressman Connie Mack (R-FL) said: “Supporting the Keystone XL pipeline will give Americans what they need – more jobs and increased security. The special interest blockade of the pipeline by President Obama and his liberal allies ends now. After multiple hearings and a new application, we stand ready to fast track the pipeline now.” It’s this kind of aggressive attitudes that is allowing the beginning of the pipeline be created while there is still mass opposition with the landowners in Texas where construction of the pipeline has begun.

Join the resistance to the Keystone XL Pipeline and the Alberta Tar Sands, the more people speaking out about this environmental injustice the greater our chance of winning! What follows are the two most recent “Breaking News” from the Tar Sands Blockade. Please circulate these posts, talk to your community, donate money, go Texas for the the direct action camp! There are many ways to show your support! 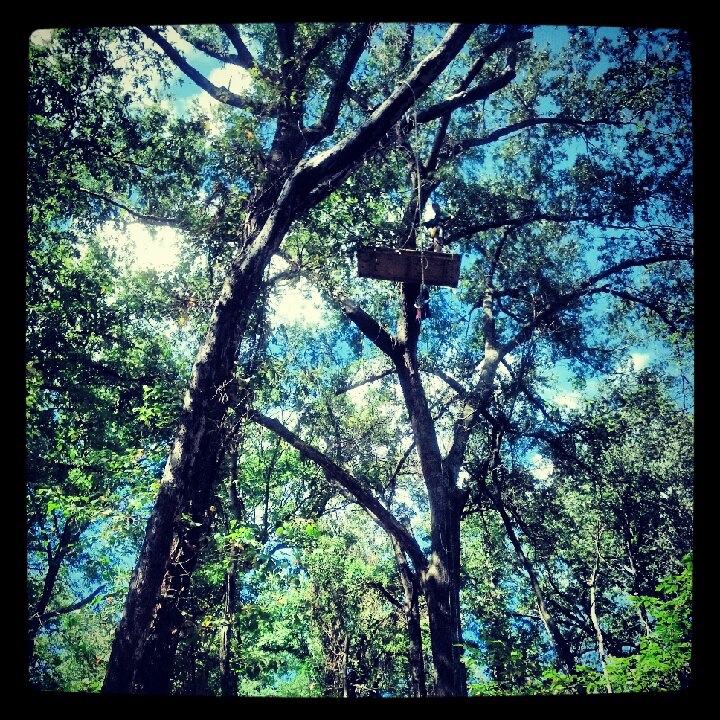 Beautiful shot of the new tree-sit!

A Texas man climbed up in a tree and is refusing to come down to prevent TransCanada from bulldozing a section of a nature preserve for its Keystone XL tar sands pipeline. Today’s events at West End Nature Preserve outside Mt. Vernon, Texas mark the second tree sit staged by Tar Sands Blockade. The other tree blockade, located just south of neighboring Winnsboro, Texas, marks its 18th day today.

Kevin Redding, 22, a lifelong Texan who currently resides in Austin, described his decision to climb the tree, “I want to defend our Texas wilderness from a multinational corporation’s blatant disregard for our landscape and clean water. I’m here to defend my landowner friends and their families from toxic tar sands spills that would poison their drinking water.”

Kevin intends to prevent TransCanada’s clearing crews from cutting a wide scar of destruction through the 455-acre land preserve. Unlike a crude oil pipeline, tar sands sludge must be diluted with extraordinarily toxic solvents and then heated to extreme temperatures to be pumped through the pipe. The Keystone I pipeline, Keystone XL’s predecessor, has leaked 12 times in its first year of operation alone. Keystone XL would carry a more toxic, pipe-corroding substance which could result in upwards of 1.7 million gallons a day of spilled sludge without even triggering TransCanada’s leak detection system. 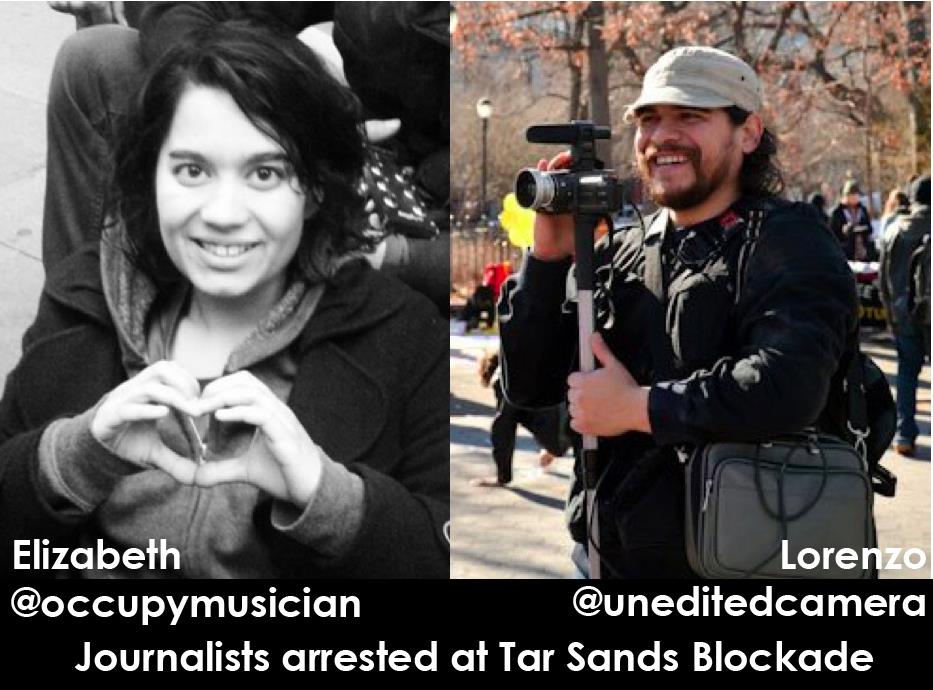 Two journalists working for the New York Times were handcuffed, detained and then turned away from private property by local law enforcement employed as private security guards for multinational pipeline corporation TransCanada. The journalists reporting on the first tree blockade in Texas history, now in its third week of sustained resistance to the Keystone XL tar sands pipeline, were grabbed by police, physically restrained, and prevented from approaching the blockade site or making contact with protesters. These repressive actions took place on private property, indicating that TransCanada is employing a private police force to actively patrol beyond the boundaries of the Keystone XL easement without landowner permission.

A Times spokesperson released a statement saying, “While reporting a story on how protestors in East Texas are trying to stop the Keystone XL pipeline from being built, [a Times reporter] and a Times photographer were detained yesterday by local police and a TransCanada security guard; they were told for trespassing.  They identified themselves as media and were released but told they needed to leave the private property where they had positioned themselves (with the permission of the landowner). They complied.”

These events mark the latest in a series in which journalists and the Constitutional ideal of a free press suffer the same disrespect and abuse that TransCanada has shown to families along the Keystone XL pipeline route for years. Reports have included open threats of arrest on private property, the confiscation of cameras and video equipment, and arrests of by-standers on public right of ways.