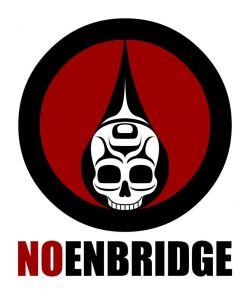 Below is an article published in a mainstream newspaper called the Globe and Mail about the apparent demise of the much maligned Gateway pipeline, proposed to carry Tar Sands oil from Alberta Canada all the way to the Pacific coast, slashing through First Nations’ lands, ecological preserves, and small farms. Direct action campaigns of road blockades and forest action have led up to this ultimate news of the cancelation of Gateway. This would be a huge victory, so props to Canada activists, and to Earth!

Also see here for a story published in the EF!J on this subject just last year.

*note: The pipeline, of course, is not officially cancelled, and is, as usual one of those walking dead proposals that could still go through, so as always, we will keep you informed. stay vigilant for the wild!

Cross Posted from The Globe and Mail

The Northern Gateway pipeline that Enbridge proposes to build from Alberta’s bitumen oil to the Pacific coast of British Columbia is, for all intents and purposes, dead.

Yes, regulatory hearings before the National Energy Board will continue until the NEB approves the project. And yes, Enbridge will keep pushing for it. And yes, the Harper government, which is so publicly committed to the project, will continue to extol its virtues as part of the need to get Canadian resources to Asia.

But the project is dead. It has too many obstacles now, and there’ll be more in the future. To survive, the Gateway pipeline would have to push past the growing opposition of British Columbians in general, the opposition of the current Liberal provincial government and the NDP government likely to replace it next year, the unanimous opposition of environmentalists, considerable opposition from at least some of the aboriginal groups along the route and, if all this were not enough, the likelihood of prolonged court battles.

What’s not standing in the way are U.S. environmentalists, whom the Harper government accused of being the principal reasons for the project’s problems. This wild statement was, then as now, completely at variance with reality, since British Columbians are hardly to be led around by their collective nose by a handful of folks from south of the border. To suggest otherwise is to insult their intelligence.

B.C. Premier Christy Clark just spent two days in Alberta, including a meeting with Alberta Premier Alison Redford that both described as frosty. Ms. Clark said she was in Alberta to inform Albertans of B.C.’s concerns and demands; but given a looming political debacle at home, she was really speaking to her home audience.

It was the height of rudeness to ask for a meeting, as Ms. Clark did, then offer nothing and not even pretend to be civil, as if the most urgent thing on her mind was telling the B.C. media how unproductive had been the meeting she sought.

But good manners flee, even between premiers of contiguous provinces, when one of them – Ms. Clark – is fighting for her political life and has come to understand how unpopular Gateway has become in British Columbia. Indeed, it would seem that the more British Columbians know about the project, the less they like it, starting with the reasonable question: Why should B.C. take most of the environmental risks for so little actual gain?

Ms. Clark, reading the political winds, has become testy about Gateway; her likely successor, NDP Leader Adrian Dix, is adamantly opposed. As are, of course, the federal New Democrats. The Harper Conservatives can steamroller the federal NDP in Parliament, but they can’t so easily steamroller the B.C. government and public opinion.

Aboriginals are divided, of course, but those who’re opposed can make life very difficult for Enbridge even if the NEB approves the pipeline. In fact, some aboriginal groups would take a green light to Gateway as a green light to appeal to the courts, arguing that their constitutional right to be consulted on lands they claim to be theirs was not respected, a precept articulated by the Supreme Court of Canada. At the very least, this litigation would stretch on for years.

Enbridge has not helped itself in the court of public opinion with embarrassing pipeline spills. These might be one-off affairs, explainable on technical grounds, but they looked bad and, politically, smelled worse.

The diminished prospects for Gateway make it somewhat more attractive building further pipeline capacity down the Fraser River to the Lower Mainland, where the Kinder Morgan-owned Trans Mountain pipeline already runs. The prospect of more ships in Vancouver’s harbour is among the obstacles for this project.

Trains? They don’t carry the capacity of pipelines. But they arouse less opposition, so that option has a better chance politically than a pipeline for bitumen to the Pacific. Shipping more oil to Eastern Canada seems to be the easiest option politically of all.