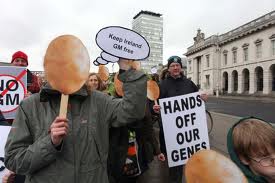 It was reported last week that Ireland’s Environmental Protection Agency had approved the trial of a genetically modified potato crop. The decision has, unsurprisingly, attracted criticism from environmental protesters.

Other campaigners against the crop have stated their fears that it will ruin the country’s reputation.

The Organic Trust in Dublin says that this approval has “grave ramifications for Irish food and farming”. The Trust’ s Gavin Lynch says that this will be the first GM trial since 1996 when a previous attempt at growing GM sugar beets was discontinued.

Those in favour of the GM potatoes have stated that the GM in this case,is similar to conventional breeding techniques – just a faster way to achieve the results.

“It is portrayed as ‘GM-lite’ – but in reality cisgenic is a nonsense,” said Mr Lynch.

“It is just there to make GM more palatable to the general public. The fact that it comes from a related plant doesn’t make it any different. The real danger is the process.”

This view is echoed by Stella Coffey, a campaigner who runs a blog called GM Moratorium, describing herself as a grandmother and biotech sceptic.

“They haven’t researched other options – it’s absolutely preposterous to use such a risky tech as your first line of action. It’s one of the biggest cons that has been perpetrated by regulatory science in a long time.”

The trial is set to run for four years. Consent has been granted subject a number of conditions and reporting requirements.