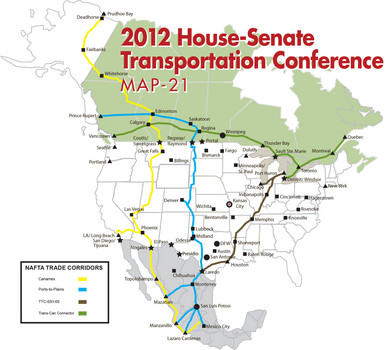 Some have tried to convince the public that the Trans Texas Corridor and NAFTA Superhighways are dead. But Congress recently passed a new, two-year federal highway bill, “Moving Ahead for Progress in the 21st Century” (or MAP-21), that not only gives priority funding to these ‘high priority’ trade corridors, it also makes it easier to hand them over to private corporations using controversial public private partnership (P3) toll contracts.

On July 6, President Barack Obama signed MAP-21 into law. As with most bills these days, Congress had to pass it in order for us to know what’s in it. Only the committee members, conferees, and lobbyists had the access to know precisely what was in it, and big business, big energy, and various and sundry special interests got just what they wanted — including state highway departments that got the environmental rules so relaxed, they can literally add toll lanes to any highway without so much as a public hearing or ANY study of the impacts, so long as it’s within the existing right of way. Check out the full story in The Examiner.

In related news, a landowner in the path of proposed I-69 construction died this week, a mere 17 days after a forced INDOT eviction from her land. Cora “Betty” Young was a long-time Citizens for Appropriate Rural Roads member and stood up during the legal fray and added her voice in letters and comments during the long I-69 study process. She was a courageous, kind and proud woman who did not want to leave the home that she helped build and lived in for 52 years.

On her thirty acres she grew fruit trees and grape vines whose abundance she shared with her friends and neighbors. She took great satisfaction in ownership of the dense, majestic, forested areas of her land. She enjoyed fishing with her grandchildren, nieces and nephews in her spring-fed pond. She spoke of the wildlife she watched out of her kitchen window and of how she marveled at the greening of spring and the bright colors of autumn. Her home was the site of many family gatherings over the years.

All was taken by I-69. Pressured by INDOT, she finally had to leave. A note from her friends had this to say: “When I last spoke with her she was still hoping she could at least hold onto a little of the land. It was not to be so. My personal feeling is she simply did not want to live away from her home place.The cruelty of this destructive highway has no bounds.”

These government escalations beg the question: is a return to the days of armed civilian resistance to forced land evictions upon us? 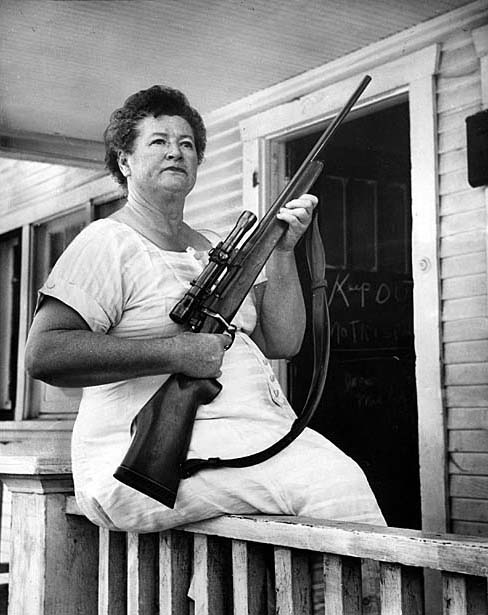 July 31, 1958: Lomie Puckett stands guard to prevent bulldozers from leveling her Edendale house for the construction of the Golden State Freeway. Puckett wanted more money than offered for the house.