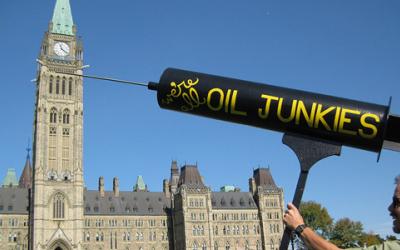 by Blake Deppe, for  The Indypendent

In June 2012, Canada’s government made excessive cuts in its environmental departments, resulting in the firing of many top scientists. On July 9, those scientists – and their supporters – had decided they’d had enough; they led a march through central Ottawa to Parliament Hill, in protesting what they said was a vicious attack on science and the environment.

The demonstration was led by a woman pointedly dressed as a Grim Reaper, leading the rest of the workers along with a coffin meant to represent “the death of evidence.” That symbolism served as commentary on conservative Prime Minister Harper’s apparent disinterest in funding or supporting all things scientific, which many feel is motivated by his administration’s bedfellowship with Big Oil.

On top of the firings and department cuts, said scientists, the Harper administration intends to stop funding a number of additional projects, like an Arctic environment atmospheric research laboratory. U.S. scientists have remarked that shutting down that lab will interfere with the world’s ability to monitor the ozone layer. Activists are quick to note that this comes at a time when oil companies are setting their sights on the Arctic and its sensitive ecosystem.

Also being shut down is the Experimental Lakes Area in Ontario, which plays a big role in studying the effects of water pollution. That area – a collection of 58 remote lakes and a laboratory – has been running since the 60’s, and was the place where the first evidence of acid rain came from.

“It is completely shocking,” said Jim Elser, an aquatic ecologist at Arizona State University, who performed experiments at the site during the 90’s. “It’s sort of like the U.S. government shutting down Los Alamos [it’s most important nuclear physics site] or taking the world’s best telescope and turning it off.”

Doing away with the ELA also means that all workers there will lose their jobs.

Jeff Hutchings, professor of biology at Dalhousie University, added, “An iron curtain is being drawn between science and society. Closed curtains, especially those made of iron, make for very dark rooms.”

The ELA also played a key role – albeit inadverdently – in the fight against Big Oil. “People working at ELA [were] constantly finding reasons why you can’t just put a pipeline here, or an industry there, because there are going to be environmental costs,” said freshwater lake biologist John Smol.

University of Victoria climate scientist Andrew Weaver was able to sum up the reason for the Harper administration’s anti-science assault: “It’s not about saving money [for the government]. It’s about improvising ideology. What’s happened here is that the government has an ideological agenda to develop the Canadian economy based on the extraction of oil as quickly as possible.” They want to “sell it as fast as they can, come hell or high water – and eliminate any barriers that stand in their way.”