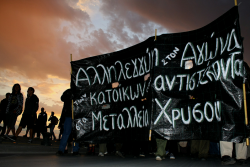 About 600 people demonstrate against Vancouver based Eldorado Gold in Thessaloniki, Greece, in April, 2012. Photo by Teacher Dude.

As people in Greece fight austerity in the streets, top officials are pushing open pit mining as a way out of the country’s economic despair. But just as folks in Greece have taken action against an imposed economic paradigm, they are taking a stand to protect their lands from mining.

“State-corporate propaganda claims that the exploitation of mineral wealth is the only way for Greece to get out of recession and mineral concessions are very high in the list of assets to be sold off,” Maria Kadoglou of Anti-Gold Greece told the Vancouver Media Co-op by email.

People in northern Greece have organized over the last 17 years to keep the coastal regions of northern Greece free of toxic mining projects. But the threat of new gold mines has been renewed over the past couple of years, and this time there is only one company in the game: Vancouver-based Eldorado Gold Corporation.

According to Kadoglou, the proposed Skouries mine is at the centre of the conflict. The company claims there is 3.6 million ounces of gold as well as copper at the site, and the company has already received environmental permits. People working for Eldorado fenced off the site, and tensions with locals -especially around forests and water- have been mounting ever since.

“People protesting the Canadian occupation of the mountain found out that [the company] had protection from the Greek police, which threw teargas and flash bang grenades at people, despite the presence of women, children and elderly,” Kadoglou told the Vancouver Media Co-op. Videos of the march and the police repression of demonstrators are posted online.

On March 17th, members of various communities from Halkidiki, Thrace and Kilkis, all of which would be impacted if Eldorado’s proposed mines go ahead, gathered to prepare and strengthen their resistance to toxic mining. Here is a translation of part of their joint statement:

Some see the severe economic crisis as a unique opportunity to curb the resistance of the Greek people and  facilitate the pillage of the country… We, the residents of the gold-bearing  regions of  Greece say NO. We are united in a just struggle against the  pillage and destruction of our  homelands. Our resistance will keep growing… We are fighting for dignity, freedom and self-determination. We are fighting for tomorrow and we shall win.

Kodoglou says the anti-mining struggles in northern Greece stand out as a paradigm of community grassroots resistance for the protection of land and the environment against the aggression of foreign corporations. Recent meetings have brought activists from Bulgaria and Romania to Greece to organize a regional anti-mining network.

“The main actions that we organize are demonstrations and protest rallies, meetings where we invite scientists  to  inform the public on the consequences of such projects, along with screenings of videos from such mines around the world. The legal cases are also very important,” Kodoglou told the Vancouver Media Co-op. “In the past decade we have successfully blocked all gold mining projects that had been permitted.”

Eldorado Gold has three proposed mines and one producing mine in Greece, and other projects in Romania, Turkey, China, and Brazil, along with head offices in downtown Vancouver.