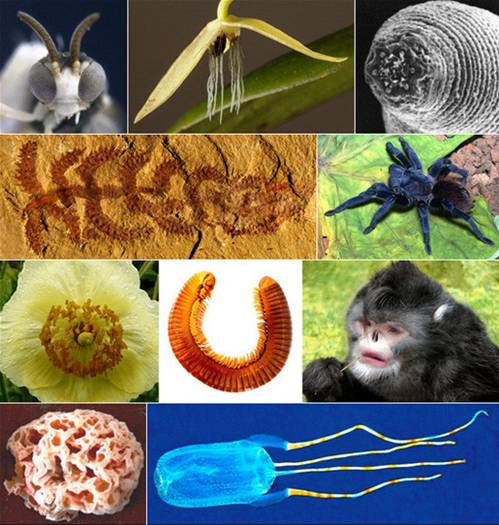 Top 10 lists are standard fodder for media: the 10 best dressed, the 10 best-looking, the 10 most wanted, etc. But the International Institute for Species Exploration, headquartered at Arizona State University, has a new take on such lists. For the last five years, the institute has been issuing a top 10 list of the quirkiest, most bizarre and just plain interesting new species discovered the previous year. This year’s list was released Wednesday, on the 305th birthday of Swedish botanist Carolus Linnaeus, who created the modern system of plant and animal names and classifications.

Scientists have so far discovered and named nearly 2 million species, but researchers estimate that there are at least 8 million species living on Earth, and some say the number could run as high as 100 million — although most think the max is somewhere around 12 million. Every year, about 15,000 to 20,000 new ones are classified. This year’s list includes a sneezingmonkey, a venomous jellyfish, an underworld worm and a fungus named for a TV cartoon. “The top 10 is intended to bring attention to the biodiversity crisis and unsung species explorers and museums who continue a 250-year tradition of discovering and describing the millions of kinds of plants, animals and microbes with whom we share this planet,” said entomologist Quentin Wheeler, who directs the institute.

— Sneezing monkey. A snub-nosed monkey found in the mountains of Myanmar, Rhinopithecus strykeri is named in honor of Jon Stryker, founder of the Arcus Foundation. Believed to be critically endangered, it has mostly black fur and a white beard, and it sneezes when it rains. A video of the monkey is here.

— Bonaire banded box jelly. This strikingly beautiful but highly lethal jellyfish looks like a box kite with a colorful long tail. Found on the Dutch island of Bonaire, it is named Tamoya ohboya because a teacher in a citizen science project thought a victim might scream “Oh boy!” when stung. A video is available here.

— Devil’s worm. Only 0.02 inches long, these nematodes were discovered at a depth of 0.8 mile in a South African gold mine and are the deepest-living multicellular organisms on the planet. It was named Halicephalobus mephisto from the Faust legend because it survives at high pressures and temperatures.

— Night blooming orchid. This rare orchid from Papua New Guinea has flowers that open around 10 p.m. and close early the next morning. Named Bulbophyllum nocturnum, it is the only orchid known to bloom at night.

— Parasitic wasp. This tiny parasite from Spain cruises at just a half-inch off the ground looking for ants, into which it inserts an egg in less than 1/20th of a second. A video of Kollasmosoma sentum is available here.

— SpongeBob SquarePants mushroom. This new species of fungus, named Spongiforma squarepantsii, looks more like a sponge than a typical mushroom. From the island of Borneo in Malaysia, the mushroom is unusual in that its fruiting body can be squeezed like a sponge and still bounce back into shape.

— Nepalese autumn poppy. This tall, yellow poppy from Nepal lives at altitudes above 19,800 feet. Named Meconopsis autumnalis because it blooms in autumn, it is thought to have been collected before, but not recognized as a distinct species.

— Giant millipede. This giant millipede from Tanzania’s Eastern Arc Mountains is about the length of a sausage and is called the “wandering leg sausage,” hence the name Crurifarcimen vagans. At 6.3 inches long, it is the world’s largest millipede; it has 56 rings, each bearing two pairs of legs.

— Walking cactus. This fossil of an extinct group known as Lobopodia looks more like a cactus than an animal, with its wormlike bodies and multiple pairs of legs. Named Diania cactiformis, the 520-million-year-old specimen was found in Cambrian deposits in southwestern China.

— Sazima’s tarantula. This iridescent hairy blue tarantula is the first new species from Brazil to be named to the top 10 list. It is called Pterinopelma sazimai and is found on “island” ecosystems on flattop mountains.