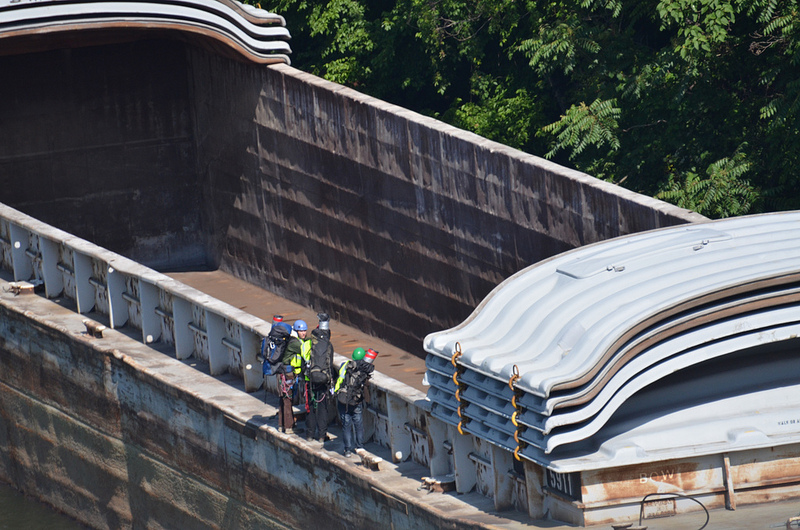 Activists deploy on a coal barge in West Virginia.

Mountain Justice and RAMPS activists blocked coal transport in two locations Thursday morning protesting mountaintop removal. Five boarded a barge on the Kanawha River near Chelyan, West Virginia, with a large banner that read “Coal leaves, cancer stays,” and locked their bodies to the barge. At the same time, dozens of concerned citizens obstructed access to the haul road on Kayford Mountain, stopping coal trucks from entering or leaving the Republic Energy mine.

“These actions against coal transport were taken because the viability and health of mountain communities are being destroyed by mountaintop removal—the coal and the profits are shipped away, leaving disease and destruction in their wake,” Rebecca Loeb, one of the people on the barge said.

According to Nathan Joseph, another activist on the barge, the struggle against mountaintop removal in Appalachia is linked to the struggles of other fossil-fuel extraction communities across North America and the world.

“The coal industry’s continued disregard for the well-being of Appalachian communities is connected to the struggles of other North American extraction communities. Strip mining tar sands for low-quality oil, fracking for dirty gas and deep-sea oil drilling are signs we are scraping the bottom of the barrel. The extraction, transport, processing and combustion of these fuels all disproportionately impact low-income communities, indigenous communities (such as Diné people on Black Mesa) and communities of color,” Joseph said.

According to a study co-authored by Dr. Michael Hendrix in 2011, a researcher at West Virginia University, “Self-reported cancer rates were significantly higher in the mining versus the non-mining area after control for respondent age, sex, smoking, occupational history, and family cancer history (odds ratio = 2.03, 95% confidence interval = 1.32–3.13). Mountaintop mining is linked to increased community cancer risk.”1 The study’s researchers collected data from 773 adults in door-to-door interviews.

As people in West Virginia see the lack of opportunities, they often leave the area to pursue a future elsewhere. Larry Gibson of Kayford said, “Our biggest export in this state besides coal is our young people.” Gibson is a founding member of Keepers of the Mountains, an organization of West Virginians seeking to end mountaintop removal and build sustainable livelihoods through land preservation and national outreach. Only 50 acres of his family’s ancestral land remain untouched by the massive surface mining operations on Kayford Mountain.

Marilyn Mullens of Coolridge, West Virginia, said “Clean water and air is a human right. My electricity is not worth my human rights being violated; I’ll live with the lights off. I want my children and grandchildren to enjoy the beauty of West Virginia. We’re tired of the corporations lording over us, and no one is hearing our voices. So, it’s time to take it further than talking.” Mullens is an organizer of Women United to End Mountaintop Removal, a May 28 event in which women will shave their heads in front of the West Virginia capitol in protest of mountaintop removal.

“For the past 150 years, the coal industry has been pillaging this place and taking everything, leaving nothing but death and destruction in their wake. I am personally very thankful to these young folks who ain’t from around here necessarily who decided to put their freedom and bodies on the line to stop this vicious cycle, even if it is just for one day,” Junior Walk of Whitesville, West Virginia, said. “I would love to see some of my native West Virginia brothers and sisters stand up and tell this industry they can’t do this anymore.”

Upcoming events to keep up the pressure:

1From the Abstract of Hendryx M, Wolfe L, Luo J, Webb, B. Self-reported cancer rates in two rural areas of West Virginia with and without mountaintop coal mining. Journal of Community Health, in press.