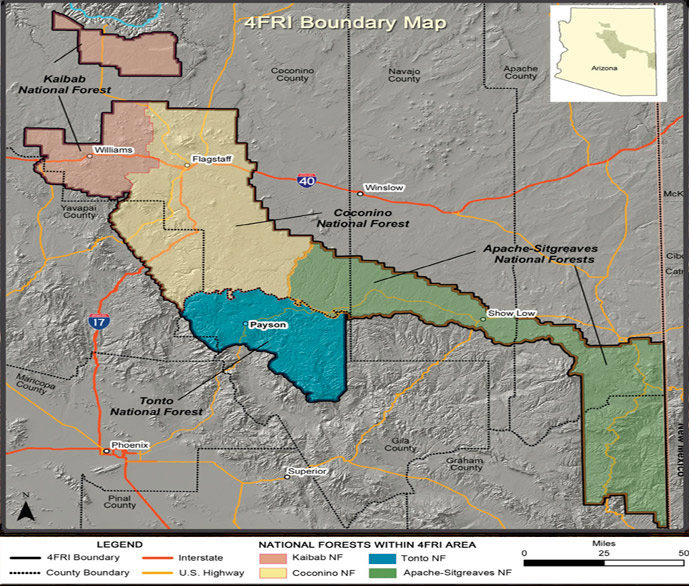 Map of the Four Forests boundaries.

FLAGSTAFF, Ariz.— The U.S. Forest Service awarded one of the largest-ever tree-cutting contracts in the history of the national forest system today to a timber company represented by a retired Forest Service official. While he was a federal employee, the official was the agency’s liaison to that same company’s timber-sale inquiries in the same region. The contract calls for timber harvesting on approximately 300,000 acres of ponderosa pine in northern Arizona as part of the Four Forests Restoration Initiative, a showcase forest restoration project for the Obama administration under what’s known as “the Collaborative Forest Landscape Restoration Act” and program.

Speaking of today’s contract award, Taylor McKinnon, public lands campaigns director with the Center for Biological Diversity, which has led the charge to reform logging in the Southwest, said, “The decision stinks of cronyism.”

“Much of the Southwest’s last old growth was liquidated on Marlin Johnson’s watch during his years at the Forest Service—it was wrong then and it’s wrong now, and the fact that Mr. Johnson is wearing a different hat this time underlines that fact,” he continued.

During his tenure as the southwestern region’s silviculturist, Marlin Johnson was one of the agency’s liaisons for Pioneer Forest Products’ timber-sale inquiries; within a year of retirement, in 2008, Johnson began representing Pioneer’s inquiries to the same Forest Service office in which he had worked. Since then, representing Pioneer in Four Forest Restoration Initiative stakeholder meetings with the Forest Service, Johnson has openly pushed to log old-growth trees and forests.

As regional silviculturist Johnson presided over an attempt to loosen regional limits on logging mature and old trees and forests in Arizona and New Mexico without public or environmental review. Without officially changing the forest plans that guide management of the public’s forests, and over the concern of staff and other agencies about lawfulness and impacts to wildlife, the Forest Service’s southwestern regional office under Johnson tried to sharply reduce the amount of mature and old forest the agency is required to leave on the landscape after logging.

The southwestern region has tried to follow this guidance since Johnson’s retirement, and because logging intensities violate wildlife protections in forest plans, several of those timber sales have crumbled under internal review prompted by administrative objections from the Center. In its collaboration on the Four Forests initiative, which has suffered at the hands of regional micromanagement, the Center has warned the Forest Service not to deploy Johnson’s guidance; it’s unclear whether or not the Service will do so. Last week the Center sued the Forest Service for using that guidance at the Jacob Ryan timber sale, which would log old growth trees near Grand Canyon’s north rim.

Pioneer Forest Products, a Montana corporation, was one of four bidders on the contract. Another, Arizona Forest Restoration Products, had advanced a plan solely focused on using small-diameter trees, and signed an historic memo of understanding with conservation groups committing to a common goal of ecological restoration as a step to restoring healthy, fire-maintained forests and native biological diversity.

“Today’s decision, among many other signs, suggests that the Forest Service’s leadership, after all these years and despite mountains of restoration rhetoric to the contrary, remains hopelessly mired in an antiquated age of agricultural forestry.”