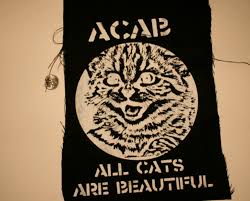 While CFD is out in the woods occupying the Goose timber sale, their friends in town are busy Occupying trees as well.  It seems like the local media mostly didn’t notice, so Eugene Occupy the Trees had a small march. It was called by some a “kids’ march”, and was indeed a family friendly event before some big, stinky police decided to mess with the kids…

[Occupier] Lotus says officers were trying to hand out stickers to some children, and that’s when the problems escalated.

“She said, ‘Don’t take that. Don’t give that to my son, and I don’t want you to have that. You’re not welcome here.’ And then he reached out to give him another sticker, and then she reached out and slap her son’s hand away and made contact with cop and so she hit his hand,” Lotus said.

The officer didn’t arrest the woman because of the large crowd, but then approached her a short time later to make an arrest.

“Another person interfered with that arrest and both were subsequently arrested. There was some physical resistance, and that’s when pepper spray was used,” [the Po] said.

“They took her and literally threw her on to the ground. Her girlfriend was pepper maced, and it was just a really overblown police response. The entire area was full of vehicles and the kids were there screaming,” Lotus said.

Seriously? Eugene Po-Po giving unwanted objects to kids and then macing their Moms in broad daylight. Why? Because they can get away with it in today’s Eugene, as well as widespread treatment of Occupiers like scum.

A.C.A.B. of course, but it’s notable that the Eugene Po have long been under the impression that street kids (or those who look like street kids) are not actually people.

P.S. Click here for some reports from Occupy the Trees in Tasmania.