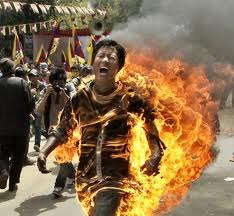 Prior to the arrival of Chinese president Hu Jintao in the Indian capital of Delhi, a Tibetan activist named Jamphel Yeshi set himself on fire in protest during a demonstration, suffering severe burns that covered most of his body. The 27-year-old Tibetan exile ran screaming down the street as flames licked at his body before he collapsed on the ground, where fellow protesters tried to beat out the flames.

Once Yeshi’s inferno was finally put out, Indian doctors transported him to a local hospital. “His condition is very critical,” said Sonam Wangyal, one of Yeshi’s cousins. “The doctors had to do an operation to get him breathing.”

Yeshi’s self-immolation occurred near the Indian parliament in the center of Delhi, following a march by several hundred Tibetans to protest the Chinese president’s visit. Jintao is visiting India to participate in a meeting of “Brics” (Brazil, Russia, India, China and South Africa) leaders, according to the BBC.

“No one knew of his plans,” Wangyal said. “He did this act to fight for the rights of all the Tibetans.”

Over recent months, at least 25 Tibetans have set themselves ablaze to protest against Beijing’s rule over the region. Many of those who participated were monks, but most of the self-immolations took place in the Tibetan parts of the Sichuan province; this is only the second incident to occur in India in recent years. In 2011, a Tibetan exile similarly set himself on fire outside the Chinese embassy, but only suffered minor burns.

The struggle of Tibetans against Chinese colonization and industrial expansion certainly has an ecological component as well, which was identified in a story posted on the Earth First! Newswire earlier this year about the Tibetan village of Abin battling a gold mine on the sacred Mount Kawagebo, where villagers attempts to deal directly with the mining company resulted in threats and violence from agents hired by the company, and arrests by local police.

After efforts to negotiate with the local government there failed, villagers pushed $300,000 worth of mining equipment into the Nu River. A leader of the group was arrested, but later released when 100 villagers surrounded the local police station where he was being held.

On January 20, 2012, a village leader who had tried to confront the mining company was ambushed by local police, tased and arrested. Some 200 community members surrounded the police station, and an ensuing riot resulted in violence and injuries on both sides, with at least one villager sent to the hospital with serious injuries. The leader was released, but protests continued as villagers demanded closure of the mine, and hundreds more villagers from the surrounding area joined in.

Unfortunately, Abin is but one of many villages threatened by mining activities—in most other cases, marble quarrying—and a greater overarching threat to the region: hydroelectric dam development.

Along the Nu (Salween) River, the longest free-flowing river in mainland Southeast Asia, a proposed 13-dam cascade—including several dams in or very close to a World Heritage site—would wipe out areas around Mount Kawagebo and displace the communities of the river valley, dealing a blow to their traditional culture as well. Although the project was put on hold in 2004 in the wake of widespread protest, it is certainly not dead.