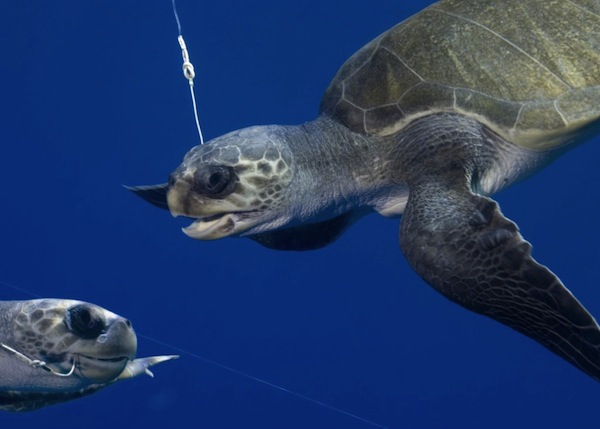 The Marine Stewardship Council allowed two eco-certifications for the use of longlines for swordfish fishing that will effect sea turtles and sharks drastically. For every swordfish caught, two sharks are killed.  Every year 1,200 endangered sea turtles are hooked by longlines, resulting in drowning. If swordfish are caught by longlines, consumers need to know what they’re buying and that the fishing method used resulted in preventable deaths. Read on for why many are arguing why longline-caught swordfish should be labeled in the market.

Two back-to-back eco-certifications of Atlantic longline fisheries for swordfish that capture and kill thousands of sharks and endangered sea turtles by the Marine Stewardship Council (MSC) is a death knell for the credibility for the industry-funded sustainable seafood eco-labeling scheme. Ocean conservation groups are now calling on seafood retailers and restaurateurs to stop offering unsustainable longline-caught swordfish.

“The eco-labeling of longlined swordfish dupes well-intentioned seafood lovers into unknowingly consuming fish caught in ways that sacrifice sea turtles and sharks,” said Teri Shore, Program Director at SeaTurtles.org. “It spells the end of sustainable seafood schemes since none can be fully trusted.”

Last week the MSC dismissed an objection to the sustainable certification of the Canadian Atlantic longline fishery for swordfish filed by three major marine conservation organizations, allowing the eco-labeling to go ahead with only minor technical changes in the assessment document.

This followed in the wake of the eco-certification of the Florida longline swordfish fleet, which targets swordfish and accidentally captures sea turtles from the same populations as the Canadian fishery, without any consideration of cumulative impacts. The Florida swordfish fishery captured an estimated 147 endangered leatherbacks and loggerheads from 2005 to 2009.

At the same time, the MSC’s credibility has been undermined by several major Alaskan fisheries vacating the program in favor of self-certification, which will further undermine the credibility of eco-labeling and sustainable seafood marketing.

The MSC assessment of the Canadian longline fishery recognized that two sharks die for every swordfish caught and that the fishery captures 1,200 endangered sea turtles every year and operates without measures that protect sea turtles. Neither fact will prevent the newly-certified fishery from selling swordfish marked with MSC’s ‘blue check mark’ as of March 2012.

Longline-caught swordfish is listed on Canada’s SeaChoice Red ‘Avoid’ list, the Monterey Bay Aquarium Seafood Watch Red ‘Avoid’ list, and Greenpeace International’s Seafood Red List. These assessments are based on the best science available, include strict conservation criteria, and are not paid for by industry clients, unlike the Marine Stewardship Council.

Giant retailers that want to profit from rising demand for sustainable seafood are triggering the false eco-labeling of fish caught with destructive gear such as the two longline swordfish fisheries.

Even worse, the U.S. government warns women of child-bearing age (18 to 45) never to eat swordfish due to high mercury levels (as well as shark, mackerel and tilefish). No certification scheme considers mercury or other toxins in fish.