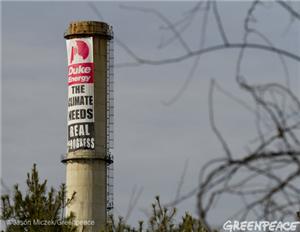 On Monday, 16 Greenpeace activists were arrested after unfurling a banner at the Progress Asheville Power Station hang a banner on a smoke stack at the plant. Activists secured themselves to the coal loader and conveyers, which prevented coal from entering the facility. The Progress Energy owned Asheville Power Station uses the most destructive form of coal mining, mountain top removal, which is flattening mountains across Appalachia. The plant produces 1,994 pounds of sulfur dioxide, 788 pounds of nitrogen oxides, and 2,629,243 tons of carbon dioxide. Its coal ash ponds are designated ‘high hazard’ by the EPA, meaning they are likely to kill people if they spill.

The environmental group said Tuesday its protest at Progress Energy’s Skyland plant was the start of a campaign against using coal to help produce electricity.

Greenpeace leaders announced the campaign from Washington, D.C., but an official declined to say whether the group would try events similar to one Monday in which activists scaled a 300-foot-tall inactive smokestack and unfurled a banner targeting Duke Energy.

The environmental group says Duke, once it acquires Progress in a pending merger, will be the nation’s largest utility, making it a key player in energy policy.

“We must shine a light on Duke’s activities in 2012 because this is a make-or-break year for the climate, and Duke is at the center of it,” Greenpeace USA Executive Director Phil Radford said.

Greenpeace is asking Duke to stop mountaintop removal of coal and to aim for at least a third of the company’s energy to come from renewable sources by 2020. The group also wants Duke to quit using coal altogether by 2030, citing harm to the environment and human health.

Locally, Greenpeace activists still in Asheville will follow up Monday’s protest with a community meeting tonight to discuss future strategies for opposing the use of coal to fuel the Skyland plant.

The meeting at Posana Café in downtown Asheville is open to the public and will include representatives from area environmental groups including Appalachian Voices, Greenpeace spokesperson Keiller MacDuff said. French Broad Riverkeeper Hartwell Carson also is expected to attend.

“We’re going to talk about where the community wants to go from here, how we move forward,” MacDuff said.

“I think the activists were really pleased that Duke and Progress heard the message that it’s time to move away from coal,” MacDuff said.

She declined to discuss other possible actions against the company, saying only, “Duke certainly is going to feel the pressure. We’ve been working on organizing this campaign against Duke for a long time.”