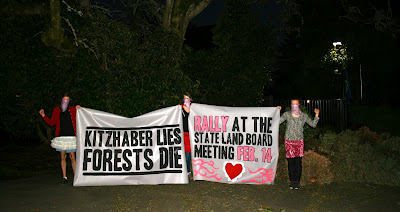 On February 3 Cascadia Forest Defenders (CFD) blockaded the entrance to the Oregon Governor’s Mansion with a mound of christmas trees. Activists held banners, reading “Rally at the State Land Board Meeting Feb. 14” and “KITZHABER LIES, FOREST DIE!” One person was arrested.

On October 11th 2011, Governor John Kitzhaber approved a plan to almost double logging in the Elliott State Forest. Voters, expecting a green Governor, are outraged at the hypocrisy of his actions. “The old Elliott State Forest management plan already allowed an appalling amount of clearcutting,” says Erin Grady, a member of CFD, “The State Land Board made a 60 year commitment to this plan in 1995. And only sixteen years later, they just threw the whole plan in the trash!” If logging in the Elliott continues at the current rate, this forest will be gone within our lifetime.

In the past year, there has been widespread disappointment regarding Kitzhaber’s decisions towards the Elliott. Forest activist Echo Lively says, “If anyone was unsure about it before, we can now be sure that Kitzhaber is in the pocket of industry in Oregon.” Another forest advocate comments, “The only thing green about Kitzhaber is the money.” Kitzhaber has made many mistakes managing environmental issues in Oregon, but there is still time to save this crucial rainforest of the Pacific Northwest.

CFD invites any and all who are enraged with Kitzhaber and other members of the State Land Board to attend a rally at their next meeting on February 14th at 10:00am. It will be held outside the Department of State Lands located in Salem at 775 Summer St. NE. Come tell Kitzhaber that we won’t let our forests be destroyed without a fight.