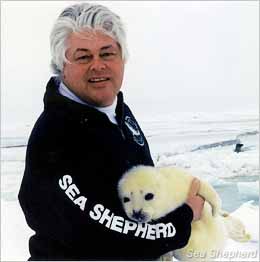 “I have been fighting the Canadian seal hunt since 1974. It’s been a long, hard road after nearly four decades. During that time I have taken ships into the ice six times, in 1979, 1981, 1983, 1998, 2005, and 2008. I’ve led three helicopter campaigns in 1976, 1977, and 1995. During this time we chased sealing vessels out of the ice, blockaded sealing ships in harbor, walked for miles over treacherous ice conditions, confronted Canadian fisheries officers and the Royal Canadian Mounted Police, debated Senators, Members of Parliament, Newfoundland Premiers, Fisheries Ministers and Prime Ministers. We’ve taken celebrities Brigitte Bardot, Richard Dean Anderson, and Martin Sheen to the ice floes and we have worked to have seal products banned worldwide. We’ve been arrested, beaten by police and by sealers, lost a ship, and we’ve been vilified across Canada as eco-terrorists, extremists, and traitors…

We took on the Canadian government and the governments of Quebec, Prince Edward Island, Nova Scotia and Newfoundland. We took on the Canadian and Norwegian fur industry and the Canadian Sealing Association. We challenged them and through determination, perseverance, and patience we confronted and wore the killers down, year after year, utilizing the most powerfully effective weapon ever invented—the camera. Through visuals, through drama, and through the media we made the world aware of this atrocity against marine wildlife and we kept them aware—reminding the international public that our passion for the cause never died.  Year after year we were in the face of the killers and year after year we grew stronger as the killers grew weaker.

Next month the Canadian government will once again toss out some ridiculously high kill quota followed by offers of subsidies (i.e. welfare) in their continued pathetic quest to keep the seal slaughter alive in the face of practically universal condemnation.

It matters not. They will fail. The writing is now on the wall and the seal hunt will be no more.

Now we need to stop the slaughter of  South African Fur Seals in Namibia.”