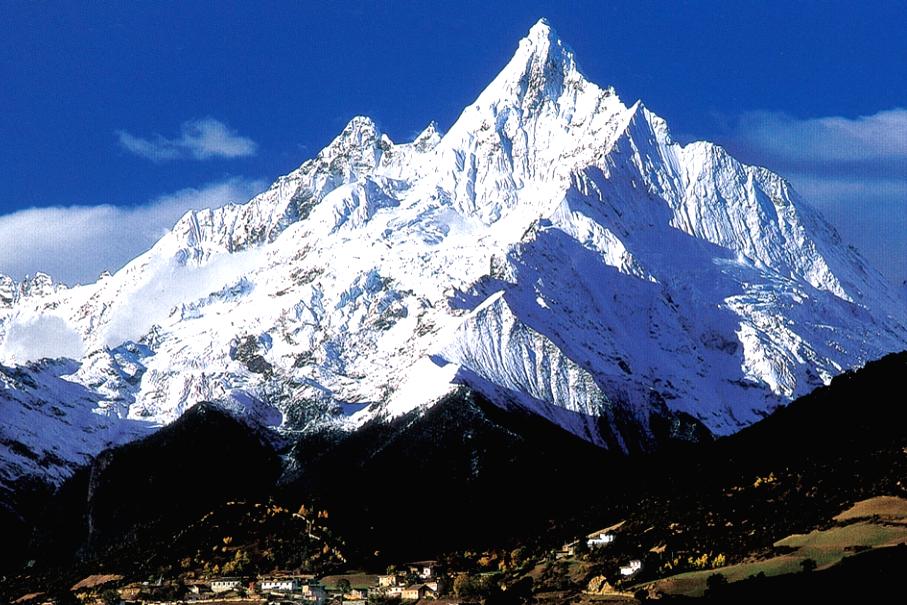 Tibetan Villagers have successfully halted a controversial mining operation that threatened Kawagebo, one of the most sacred peaks in the Tibetan world.

In Tibetan culture, where people live in intimate relationship with the natural world around them, reality and mythology have a way of blending together. So it was perhaps no surprise to local villagers when, after a Chinese mining company and local authorities repeatedly repelled efforts stop a gold mining project on the slopes of holy Mount Kawagebo, the mountain appeared to strike back.

Mount Kawagebo, so sacred that climbing is banned, sits on the border between Tibet and China’s Yunnan Province; its eastern side is part of the Three Parallel Rivers of Yunnan Protected Area UNESCO World Heritage site. In February 2011, a small gold-mining operation started near the village of Abin, which is on the western side of Kawagebo, along the path of an 800-year-old pilgrimage route that circles the mountain, attracting tens of thousands of Tibetans annually.

To the local people, who believe strongly in the sacredness of Mount Kawagebo, direct destruction of the mountain body, through activities like mining, is unthinkable. Further, villagers said the project was started without permission or prior consent. Thus began a community effort to halt the project.

Villagers said their attempts to deal directly with the mining company resulted in threats and violence from agents hired by the company, and harassment and arrests by local police. On two occasions, men armed with wooden sticks with nails attacked villagers, injuring more than a dozen.

After efforts to negotiate with the local government failed, villagers pushed $300,000 worth of mining equipment into the Nu River. A leader of the group was arrested, but later released when 100 villagers surrounded the local police station where he was being held. A few months later, however, mining resumed and tensions grew. Harassment, death threats and attacks on villagers increased, and some women and children fled to other villages to escape the violence.

On January 20, 2012, a village leader who had tried to confront the mining company was ambushed by local police, tased and arrested. Some 200 community members surrounded the police station, and an ensuing riot resulted in violence and injuries on both sides, with at least one villager sent to the hospital with serious injuries. The leader was released, but protests continued as villagers demanded closure of the mine, and hundreds more villagers from the surrounding area joined in.

This time, the local government held negotiations with the community, including the just-released leader, on behalf of the mining company, whose boss had reportedly fled the area. Villagers involved in negotiations said they were offered money in exchange for allowing the mining to continue, but they refused. On January 23, with tensions mounting, a vice-official from the prefecture government ordered the mine closed and the equipment trucked out of the village.

While the persistence of the community to protect its holy mountain ultimately paid off, some villagers suggested the mountain itself had a role to play. During the negotiations, many reported hearing the sound of a trumpet shell—used in Tibetan religious rituals—coming from the mountain, while others reported unusually windy weather, which stopped once the conflict was resolved.

A Tibetan hired to provide catering to the mine workers described being struck by a physical pressure that forced him to drop what he was carrying; only after he prayed did the sensation disappear. Several months earlier, according to another account, a village leader who had accepted bribes from the mining company died suddenly, and a member of his family was seriously injured in an accident.

He Ran Gao, a researcher who works for the Chinese NGO Green Earth Volunteers and has been closely involved with the communities of the area, described the context of these supernatural accounts. “In a place like Tibet, people have an unusual sense of divinity in nature, based on a whole system of worship and interaction, which sometime seems superstitious to modern citizens,” she said. “But it is not necessarily irrational or unreasonable.”

This sense of nature worship, Gao said, with its attendant conservation values, is “barely left due to past communism and later economic development.” But in the Himalayas and other mountain areas, where non-Han ethnicities reside and remain somewhat protected, those traditional values can still be found. She described Kawagebo as a success story showing “how sacred nature can be” and how it can “still be respected, protected and continue to make an impact in people’s lives.”

Unfortunately, Abin is but one of many villages threatened by mining activities—in most other cases, marble quarrying—and a greater overarching threat to the region: hydroelectric dam development.

Along the Nu (Salween) River, the longest free-flowing river in mainland Southeast Asia, a proposed 13-dam cascade—including several dams in or very close to the World Heritage site—would wipe out portions of the pilgrimage route around Mount Kawagebo and displace the communities of the river valley, likely dealing a blow to their traditional culture as well. Although the project was put on hold in 2004 in the wake of widespread protest, it is certainly not dead.

Last year, the World Heritage Committee issued a statement expressing concern over reports of unapproved construction under way at one dam site on the Nu River, and surveying work—including road-building and drilling—at three others. It warned that “the many proposed dams could cumulatively constitute a potential danger to the property’s Outstanding Universal Value.”

The committee asked China to submit by February 1 of this year a detailed list of all proposed dams, as well as mines, that could affect the World Heritage property, along with the environmental impact assessments of any proposed projects, prior to their approval. The committee also requested, by the same deadline, a report on the state of conservation of the property and on the progress made in completing a strategic environmental impact assessment on all of the proposed dams and related development that could impact the site’s World Heritage value.

Many thanks to He Ran Gao, who provided reporting and other source material for this report. He Ran wishes to thank villagers who provided her with information, but whose names have been witheld.