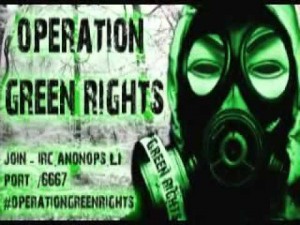 In a thread of hack events from the Anonymous group, the most recent target has been Monsanto.com. Anonymous, which briefly knocked the FBI and Justice Department websites offline as well as Music Industry websites in retaliation for the US shutdown of file-sharing site Megaupload, is a shadowy group of amazing international hackers.

Anonymous Message To Monsanto: We fight for farmers! – Video Transcript (Cross-Posted from Organic Common Sense): “To the free-thinking citizens of the world: Anonymous stands with the farmers and food organizations denouncing the practices of Monsanto We applaud the bravery of the organizations and citizens who are standing up to Monsanto, and we stand united with you against this oppressive corporate abuse. Monsanto is contaminating the world with chemicals and genetically modified food crops for profit while claiming to feed the hungry and protect the environment. Anonymous is everyone, Anyone who can not stand for injustice and decides to do something about it, We are all over the Earth and here to stay.

To Monsanto, we demand you STOP the following:

Monsanto, these crimes will not go unpunished. Anonymous will not spare you nor anyone in support of your oppressive illegal business practices.

AGRA, a great example:
In 2006, AGRA, Alliance for a Green Revolution in Africa, was established with funding from Bill Gates and The Rockefeller Foundation.

Among the other founding members of, AGRA, we find: Monsanto, Novartis, Sanofi-Aventis, GlaxoSmithKline, Procter and Gamble, Merck, Mosaic, Pfizer, Sumitomo Chemical and Yara. The fact that these corporations are either chemical or pharmaceutical manufacturers is no coincidence.

The people of the world see you, Monsanto. Anonymous sees you.

Seeds of Opportunism, Climate change offers these businesses a perfect excuse to prey on the poorest countries by swooping in to “rescue” the farmers and people with their GMO crops and chemical pesticides. These corporations eradicate the traditional ways of the country’s agriculture for the sake of enormous profits. The introduction of GMOs drastically affects a local farmers income, as the price of chemicals required for GMOs and seeds from Monsanto cripples the farmer’s meager profit margins.

There are even many cases of Monsanto suing small farmers after pollen from their GMO crops accidentally cross with the farmer’s crops. Because Monsanto has a patent on theri brand of seed, they claim the farmer is in violation of patent laws.

These disgusting and inhumane practices will not be tolerated.

SAY NO TO POISONOUS CHEMICALS IN YOUR FOOD!

SAY NO TO GMO!
SAY NO TO MONSANTO!

Global Justice Ecology Project, an anti-biotech group founded by Earth First! activists, also noted in a post on the attack that Monsanto was also one of the original founders of the GE tree company ArborGen.  The President and CEO of ArborGen, Barbara Wells, led Monsanto’s RoundUp Ready soy division in Brazil.  GMO soy in Brazil and other parts of Latin America has taken over vast swaths of Amazon and other forest land, and has displaced or poisoned many communities there. Find out more about their campaign against ArborGen here.