This weekend, journalist Rosslyn Beeby with the Canberra Times in Australia drew connections between Sea Shepherd and Earth First! in a follow-up story about the three activists detained on a Japanese wailing ship last week. Below are some highlights from the article, touching on the history of Earth First! and Ed Abbey: 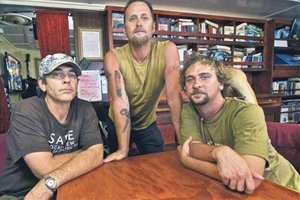 “Earth First!” That’s the sign-off used by West Australian activist Simon Peterffy in a farewell Facebook post before embarking on a hazardous night journey – in one of the Sea Shepherd’s ocean pursuit inflatables – to board the Japanese whaling vessel, Shonan Maru No 2. The move was planned, in strict secrecy, as a protest against Japanese whaling in the Southern Ocean.

”I love my life and love you all! Thanks everyone for their commitment to defend the Redtails and the earth. Earth First!” the founder of the WA anti-logging group Forest Rescue wrote. The forest red-tailed black cockatoo (Calyptorhynchus banksii naso) has become a rallying symbol for the fight to save the state’s south-west forests. Protected under WA law as a bird that is ”rare or likely to become extinct”, the cockatoos live in marri, karri and jarrah forests which are rapidly disappearing. The federal recovery plan for the species lists habitat loss for ”agriculture, timber harvesting, woodchipping and mining” as the principal cause of their decline.

Peterffy, who boarded the Japanese ship with fellow Forest Rescue activists Glen Pendlebury and Geoffrey Tuxworth, has red-tail feathers tattooed on his arms, as well as the Earth First! symbol—a stone axe and monkey wrench. And on the Forest Rescue website, the WA forest conservation group Peterffy founded some years ago, the symbol is accompanied by the Earth First! motto—”No compromise in defence of Mother Earth.”

So who, or what, is Earth First? Anyone familiar with American author Edward Abbey’s eco-activism classic The Monkey Wrench Gang knows the answer. They may even wistfully be eyeing paint aerosols in the local hardware store, wondering whether to daub ”Hayduke lives” across a billboard.

Now listed with Jack Kerouac’s On the Road, Peter Matthiessen’s Cloud Forest and Susan Sontag’s Style of Radical Will as a Penguin 20th century classic, Abbey’s book was banned in several American states when published in 1975. It describes how four disgruntled ”nature freaks”—a Mormon river tour guide, wealthy retired surgeon, herb-growing hippie-chick and ex-Green Beret Vietnam veteran—embark on a mission to blow up the Glen Canyon dam in northern Arizona. Abbey served with the United States army during World War II, and his descriptions of how to immobilise heavy machinery and wire an explosives charge have (how to phrase this diplomatically?) the kind of attention to detail that suggest first-hand experience. The book was a gale-force gust of fresh air, questioning the obtuse rhetoric of 1970s environmental consensus politics. But it was denounced by US authorities as a thinly-disguised guide to eco-terrorism, or eco-tage. Both terms can trace their origins to outraged reaction to Abbey’s novel.

The book inspired three young US environmental activists—Dave Foreman, Mike Roselle and Howie Wolke—to start a breakaway conservation movement, called Earth First! In an interview with green news website Lowbagger.org, Wolke describes how the idea arose on a trip through the Arizona desert in an old VW Kombi van. ”We wanted to break from the stuffy mould of mainstream conservation, a mould I’d always had trouble conforming to anyway. We wanted to try a new approach that would allow us to express our true ideas on wilderness, no punches pulled. As the beer trickled down our throats, lubricated our tongues and drowned our inhibitions, we began to obliterate roads, demolish dams, reintroduce extirpated species, and in effect, restore a substantial measure of the bygone but not forgotten American wilderness,” he said.

In their eyes, the mainstream green groups were elitist, middle-class, almost exclusively white, and had ”become increasingly severed from the spirit of John Muir, Bob Marshall and Aldo Leopold—icons who defined wildland conservation.” The trio also wanted to buck the stereotype of environmental activists as ” wimpy, ivory-tower, intellectual nerds”. They took their cue from a snide remark (by a wimpy, ivory-tower type) that they were ”DWD types” – dangerous when drunk. And why not? They had a perfect fictional role model in George Hayduke, the rednock beer-swilling army veteran in Abbey’s book. A counter-stereotype, the bad-ass, para-military, DWD eco-dude was born.

Earth First! emerged as a serious – and provocative – player in green politics in the early 1980s. The organisation developed the concept of eco-stunts (rolling a plastic crack down the side of the Glen Canyon dam), tree-sits (building and occupying tree canopy platforms) lock-ons (activists chained and padlocked to heavy machinery) and roadblocks (dumping car bodies into deep pits dug across logging tracks).

By carrying the novel Hayduke Lives!, Neil Godfrey set off a bizarre turn of events that prevented him from flying. photo: Michael T. Regan, CityPaper

Abbey’s books can still raise the ire of US authorities. Just ask the young student who pulled a copy of Hayduke Lives (the sequel to The Monkey Wrench Gang) out of his backpack during a routine baggage search at Philadelphia International Airport, en route

to a family reunion in Arizona. Within minutes, he was surrounded by police, state troopers, airport security officials and a National Guardsman, wanting to know why he was reading the book. ”About 10 to 12 people examined the novel for 45 minutes, scratching out notes the entire time,” he later told a local newspaper. [That was Neil Godfrey in Philly, PA, 2001]

As Abbey once drily remarked, ”One man alone can be pretty dumb sometimes, but for real bona fide stupidity, there ain’t nothin’ can beat teamwork.”