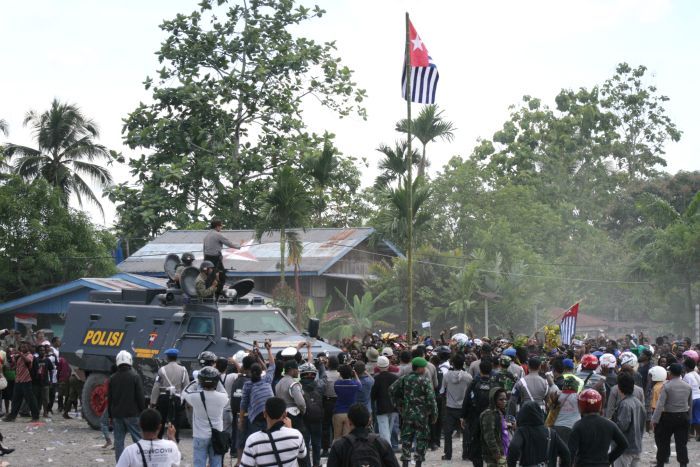 Earlier this month, West Papuans raise their flag of independence, calling for the end of Indonesia's occupation. On December 13, Indonesian security forces burned and raised nearly 30 West Paupuan villages and forcefully evacuated another 130.

Thousands of people have reportedly fled in terror from a large area in Paniai, West Papua as a massive combined Police and military offensive attacked villages on December 13, attempting to break armed resistance from pro-independence guerrillas.

Credible human rights sources are claiming up to 20 local people have been shot dead by Indonesian security forces around the jungle centre of Markas Eduda, during a brutal operation that is reported to have razed 26 villages, and caused over 10,000 people to flee to the relative safety of Enaratoli.

Over four full strength combat battalions of Indonesian army (TNI) Kostrad commandos from Battalion 753, Brimob paramilitary police, and elite counter-terrorism troops from Detachment 88 – all units armed, trained, and supplied by the Australian Government – were deployed in a cordon to surround the headquarters of the Paniai Free Papua National Liberation Army (TPN-OPM), under the command of General Jhon Yogi.

Since 7 December, civilians from the villages and around Dagouto and Eduda have been progressively evacuated, with no regard for welfare, by security forces. Many were housed in a multipurpose hall Uwatawogi Enarotali. This evacuation was carried out at the request of Chief of Police, Secretary of Paniai District and Commander of the Special Team Gegana Brimob, to broaden the battlefield between the TPN and the Mobile Brigade. Paniai Civilians became increasingly restless and frightened, and had little access to food or basic needs, their starving even more pronounced.

According to human rights sources, security forces have been constantly targeting remote communities that inhabit the foothills along the West-East mountain range which extends from the Grasberg to Cape Dagouto-Lake Paniai.

Background of the crisis:

Over the twenty six years that Indonesia has held official control of West Papua, the indigenous population has endured one of the twentieth century’s most repressive and unjust systems of colonial occupation. An on-going war has been fought against a popularly supported indigenous movement opposed to Jakarta’s rule, and against members of the civilian population who stand in the way of Indonesian “development”. Under the Indonesian government’s Transmigration program, the indigenous West Papuans are being reduced to a minority population due to an annual influx of over 10,000 families of sponsored migrants from Java and Sulawesi and an unknown number of “spontaneous” migrants. The widespread appropriation of land for new settlements, forestry concessions, mining projects and farming has led to numerous large-scale conflicts between the Indonesian military and dispossessed tribespeople, particularly in the late 1970s, 1984, and again in 1990-92 and 1994-95.