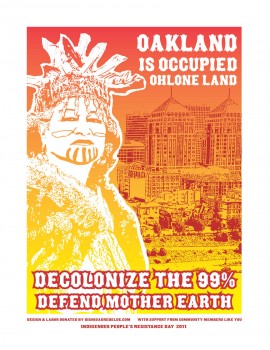 The Occupy Wall Street (OWS) movement may be the most significant social movement in the U.S. since the pre–Iraq War protests in 2002, which saw tens of thousands of people take to the streets in some cities. But OWS has more in common with the activism of the civil rights era than the antiwar protests because it exposes the imbalances of American society, and while Native people are acutely aware of those imbalances, many of them are questioning the terms of the OWS debate—they wonder, for example, what it really means to “occupy” Wall Street, or any place else in America for that matter?

As many Native bloggers and activists have pointed out, Wall Street is already occupied—it was (and is) the territory of the Lenape and other First Nations. That’s why some Native activists see decolonization as a more appropriate framework for any discussion of the current economic crisis. This has been expressed in many ways throughout Indian country. In Albuquerque, the OWS movement based on the campus of the University of New Mexico that had been calling itself “Occupy Burque” voted to adopt a new name: (Un)Occupy Albuquerque, linking corporate greed to the theft of Native land.

In early October, the Albuquerque (un)occupation movement enjoyed vigorous participation by the community, fueled in large part by energetic students skilled in the art of street activism. A blogger on the website DailyKos.com identified only as “evergreen2” noted that New Mexico, which is one of the most diverse states in the nation and is one of only four U.S. states with a majority-minority population—that is, less than 50 percent white—has a “very strong and vocal indigenous population” for whom the term occupy is problematic: “For New Mexico’s indigenous people, Occupy means 500 years of forced occupation of their lands, resources, cultures, power and voices by the imperial powers of both Spain and the United States. A big chunk of the 99 percent has been served pretty well by that arrangement. A smaller chunk hasn’t.”