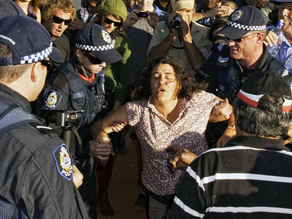 Police clearing the road at the blockade site in July

Broome, Australia—Woodside tried to bring heavy machinery to the site of their liquefied natural gas (LNG) hub at James Price Point in the early hours of Friday morning, August 25. About 50 protesters blocked the convoy of equipment under police escort heading to the massive fossil fuel infrastructure project in the Kimberley wilderness on the northern coast of Western Australia. A 57-year-old woman was arrested after she locked herself to a low-loader trailer. Other protesters clashed with police. The convoy of about 30 trucks was also blocked by two people locking themselves to heavy machinery and a concrete barrel.

Over 30 people have been arrested this summer in similar blockades against the project.