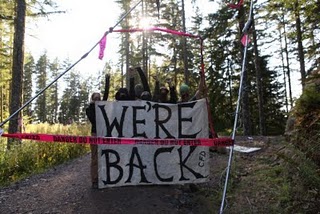 Coos County , OR— Early Tuesday morning a number of activists with Cascadia Forest Defenders and Cascadia Earth First! unfolded a series of road blockades in the Elliott State Forest closing access points to timber sales along the west fork of the Millicoma River. The blockades consist of an array of Tree-sits and ground level locking devices.

The sales are all slated for clear-cut logging, and are areas of native forest that have never before seen a chain saw. They exist on steep slopes where erosion from logging threatens to further damage Salmon habitat, as well as devastate protected species including Marbled Murrelet and Northern Spotted Owl.

“For decades, activists in the northwest pushed the forest service into changing there ways for the better, and we have seen dramatic improvements in the types of projects federal agencies are working on, The Oregon Department of Forestry has taken the opposite route, showing total disregard for life, and the health of these ecosystems, this is the beginning of a long term campaign that aims to see state lands managed for sustainability, bio-diversity and the overall health of the ecosystem, we will keep the pressure on in The Elliot, and all over the state of Oregon from this point forward” –Jason Gonzales, Cascadia Forest Defenders.

“The clearcutting in the Elliot is the worst in the state. They would never allow cuts like this on federal forest.”  —Meredith Cocks of Cascadia Forest Defenders.

Activists in the canopy have issued the following list of demands for the State Land Board and the Oregon Department of Forestry that they say must be met before they will willingly leave the forest:

3) Halt the export of raw logs from all Oregon forest, public or private

5) Stop the use of herbicides and the slaughter of the native mountain beaver.

This action is a culmination of last weekend’s Forest Defense Action Camp. Around 70 people from around Coos and Douglas county, as well as other areas of Oregon and the country gathered near the Elkhorn Ranch ORV Park in the Elliot for the three day camp. Attendants were educated on current threats to the Elliot State Forest as well as provided with trainings to engage in direct action, climbing and more.

UPDATE: On Wednesday Night, July 27th, Law Enforcement arrived at the Elkhorn Ranch Timber Sale tree-sit and blockade in the Elliot. Protesters at the site have been warned that Law Enforcement will attempt to forcibly extract anyone remaining at the blockade at noon today, July 28th. Although a bulldozer plowed through the slash piles the previous evening, as of this report, road blockades and canopy occupations continue.

Please see www.forestdefensenow.com for regular updates on this developing situation. 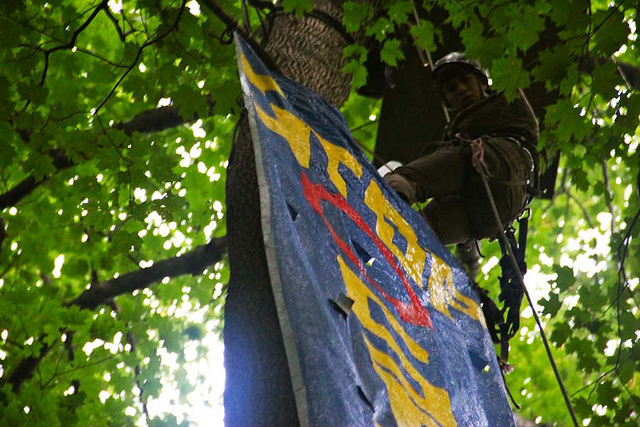 Photo from day one of the Coal River Mountain tree sit

While more ground support people have been arrested, the tree sitters are still holding out and calling for end of strip mining in Coal River watershed. Support continues to grow. Check out the new statement they released a yesterday.