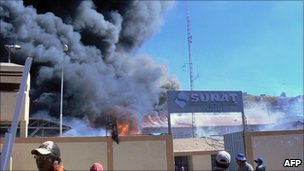 Thousands of angry indigenous protesters have taken over the city centre of Puno in south-eastern Peru. Looters have taken advantage of the unrest and ransacked offices and shops as the police retreated.

Cars and buildings were torched on Thursday night when protesters went on the rampage, demanding an end to a Canadian silver mining project.

The indigenous Aymara activists say the mining company will pollute their ancestral lands.

The protesters have blocked the main roads into the city. A customs office was set ablaze on Friday and several other buildings are still smouldering after being torched in the night.

The demonstrators have threatened to continue the disruption until the government revokes the mining concessions for the Canadian Bear Creek mining company.

The activists say the mining corporation will contaminate nearby Lake Titicaca, decimating the fish stocks. However, the firm denies it will harm the environment and wants to begin production next year.

The unrest in Puno comes two weeks before the 5 June presidential run-off election. The indigenous activists say they will try to stop the polls from going ahead in Puno if their demands have not been met. 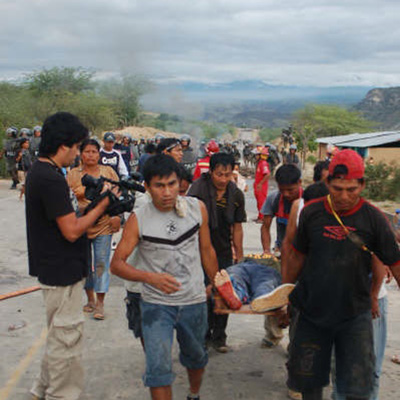