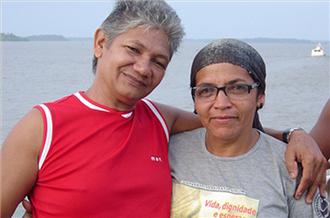 An Amazon environmental activist and his wife were killed late on Monday and the crime is being investigated as a possible assassination to silence the outspoken forest defender, according to police.
José Claudio Ribeiro da Silva, also known by his nickname of “Ze Claudio,” was shot and killed along with his wife, Maria do Espírito Santo da Silva, in Nova Ipixuna, a rural town of 15,000 people in the northeast Brazilian Amazon state of Para, about 40km from the nearest city, Maraba.

Exact details and circumstances of the death are not yet clear. However, Felicio Pontes a federal prosecutor in Para state, as well as Marcos Augusto Cruz, the local civil police investigator, told Al Jazeera by phone late on Tuesday that the killings have all the signs of a cold-blooded murder for hire.

“We are working on a hypothesis that this was an execution because the shooters cut off one ear of each of the victims,” Cruz told Al Jazeera.

“Usually this is done as proof to give back to whoever ordered the killings,” Cruz told Al Jazeera, before adding that is was likely he was killed in retaliation for speaking out against illegal loggers.

Ribeiro was a community leader of a rural Amazon sustainable reserve that produces nuts and natural oils native to the forest.

But as loggers moved into Para state, Ribeiro increased his candid denouncements of illegal clear cutting in the region, which earned him praise from environmentalists but allegedly scorn from logging and business interests who hold enormous influence in the heavily deforested region.