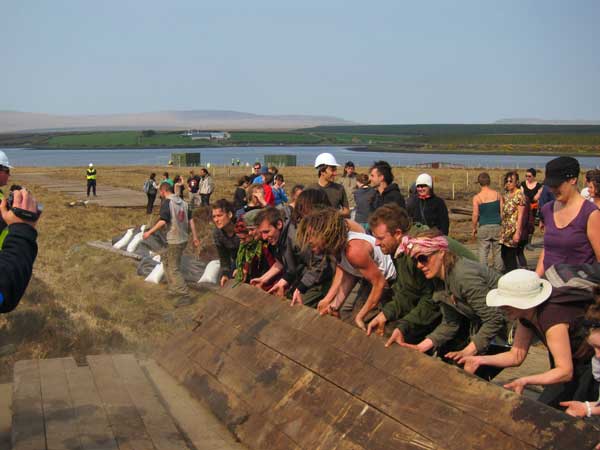 For a decade, local residents of Rossport and international solidarity activists have been fighting and organizing against a disastrous proposal by Shell, the Corrib gas project (Irish: Ghás Aiceanta na Coiribe), which entails the extraction of a natural gas deposit off the northwest coast of Ireland. The project includes a development of the Corrib gas field, and constructions of the natural gas pipeline through Rossport and a nearby gas processing plant.

To mark a decade of opposition, The Party against The Pipe, is being held over the June 4-6th weekend. The festival will take place at Aughoose and will feature an eclectic mix of music, circus performance, children’s activities and free camping.

At an international solidarity event in County Mayo yesterday, May 24, 2011, entitled From Bhopal to Rossport, local Mary Corduff said residents were made criminals in their own land. “The struggle in Rossport goes on, with the section of the project left to be completed the hardest for Shell, but also the hardest for us. The struggle has had some successes however, as originally Shell had planned to have gas in the pipeline by 2003.”

Gary Whitedear of the Choctaw Nation spoke, reminding the community event of the solidarity between the Choctaw and the people of Ireland, which began in 1847 when the Choctaw Nation sent $170 in famine relief to Ireland, and was renewed in 2008 when they sent a small monetary donation to the struggle against Shell. The event also heard from activists in Guatemala and from the campaign for justice in Bhopal, India.

The actions against Shell in Rossport show no sign of letting up. On May 17, protesters who have been involved in a series of actions in northwest Mayo, blocked access to the Corrib Natural Gas building in Belmullet to mark the Royal Dutch Shell Annual General meeting in The Hague and London. They also damaged Shell fencing at the Aughoose site on the previous Saturday, where preparatory work has started for the sub-sea tunnel under the Sruwaddacon estuary.

Earlier this month, Shell’s bog road was torn up at Rossport Solidarity Camp. A full report, with video can be seen here.

Another recent film on the Rossport struggle, Pipe Down, is available for free streaming on line. Pipe Down, won Best Feature Documentary at the Waterford Film Festival 2009.

Both films tell the story of the rural community in County Mayo, who have been battling the oil giant Shell over their plans to put a  raw gas pipeline through the community and complete construction of a gas processing terminal that is a threat to their delicate environment.