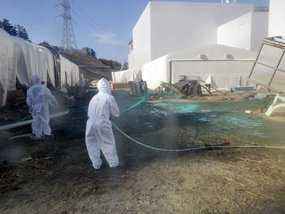 Workers spraying resin on the ground near the reactor buildings to protect the spread of radioactive substances. (AFP/HO/TEPCO via Jiji Press)

It brings the total number of deaths at the complex to three since the massive earthquake and tsunami struck in March.

The man, aged in his 60s, started working at the plant on Friday.

Taichi Okazaki, a spokesman for plant owner TEPCO, says the man was exposed to 0.17 millisieverts of radiation on Saturday – far below the company’s safety threshold of 5 millisieverts.

Mr Okazaki says the cause of his death is not known.

“No radioactive substances were detected on the worker,” Mr Okazaki said. There were no signs of injury on the dead man.

The worker, who was not immediately identified, was carrying chainsaws with another worker inside a facility to treat contaminated water being released from the plant’s crippled reactors.

He fell ill 50 minutes after starting work at 6.00 am on Saturday (local time) and was brought to the plant’s medical room unconscious. He was later moved to a nearby hospital and confirmed dead.

Goshi Hosono, a special adviser to prime minister Naoto Kan and a ruling Democratic Party politician, voiced concerns about the working environment at the Fukushima complex on Wednesday.

“I would like to spend my energy to improve working conditions. Many people told us working environment (at the plant) is way too bad,” he told a news conference.

The March quake and tsunami triggered cooling system malfunctions at the plant, and caused radiation to leak into the atmosphere and the sea, prompting Mr Kan to review Japan’s nuclear-leaning energy policy from scratch.

Engineers are still struggling to bring the Fukushima plant under control. Two TEPCO employees went missing while patrolling the plant soon after the quake and were later found dead.

The most recent death comes as the operator of the Hamaoka nuclear power plant completes a total shutdown of the facility.

Mr Kan called for the closure last week to avoid a repeat of the disaster at the Fukushima plant, where engineers are still struggling to bring it under control.

Despite the ongoing nuclear crisis, Mr Kan is expected to announce that the country will keep using nuclear power at a G8 summit in France later this month.