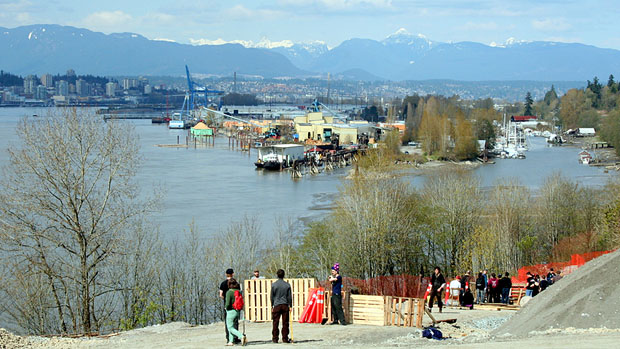 [/caption] Anti-Road protesters in British Columbia, Canada erected a camp over the weekend to block the construction of a freeway in North Delta. The ‘Stop the Pave’ group has said they plan to stay on the waterfront site in the 10700 block of River Road in order to halt construction of the South Fraser Perimeter Road when it resumes after the Easter long weekend. Organizer Eric Doherty said that many of those opposed to the plans are local residents concerned with the road’s impact on the neighbourhood and its heritage. “We’ve got the Glenrose Cannery, we’ve got the St. Mungo’s archeological site the province wants to pave over, and we’ve also got a whole number of historic little fishing villages,” Doherty said. The provincial government has promised $80 million for fish habitat upgrades, agricultural improvements, and environmental mitigation for the project but Doherty said people don’t have much faith in these promises. “No one trusts them to actually do a good job with any of those things. We know 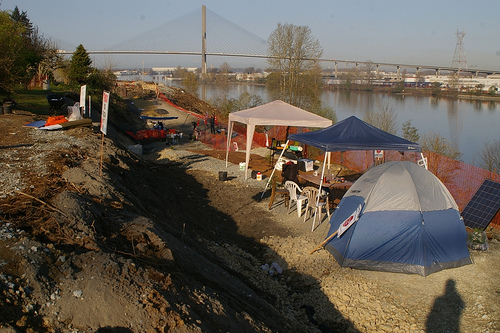 they’re in a financial crisis and the first things that get cut back are things like agricultural improvements.” Doherty said that the protest group is also opposed in principle to the B.C. Government’s ‘Gateway’ transportation project: They feel that building roads designed to ease traffic congestion comes at the expense of the environment. Lawsuit launched In November, another local group opposed to the South Fraser Perimeter Road initiated legal action in an attempt to protect the local environment. The Burns Bog Conservation Society alleges that the federal government is failing to protect the bog from negative ecological impacts that will result from the construction of the four-lane highway along its current path.

Interested in this campaign? Why not throw down a few bucks? Click here to donate to the Stop the Pave campaign.