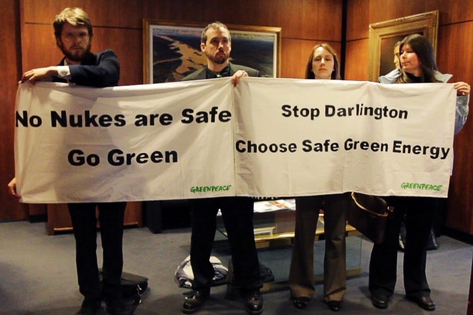 Demonstrators began their sit-in around 9 a.m., chaining themselves together and opening a banner that read, “Stop Darlington, Choose Safe Green Energy.”

“40 days after Fukushima and Duguid has yet to consider alternatives,” protester Shawn-Patrick Stensil tweeted from the building.

The ministry’s press secretary had said officials were willing to talk with the group, and police would not remove them as long as they were peaceful.

It’s not yet known why the arrests happened.

The Ontario government is planning to add two new reactors to Darlington, 70 kilometres east of Toronto. The federal government has been studying the plant since 2006. The proposal is up for debate and has new urgency in light of the disaster in Japan.

That country’s March 11 earthquake and subsequent tsunami caused serious damage to the Fukushima Dai-ichi nuclear power plant in the north part of the country. Earlier this month, radiation levels reached a high not seen since the 1986 Chernobyl disaster in the former Soviet Union.