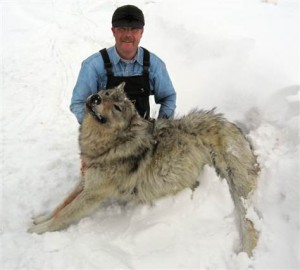 The budget deal that will be voted on this week to avoid a government shutdown may cost lives. The lives of gray wolves, that is. A rider that will be included in the budget package to authorize the states of Montana and Idaho to remove the gray wolf from its protected listing under the Endangered Species Act. Wolf “de-listing” has been a hot issue in the northern Rockies as wolves threaten livestock with population expansion. Washington lobbyists for the effort include former Idaho Republican Sen. Larry Craig. The rider in current form authorizes de-listing for Idaho and Montana, but Wyoming may be added before the legislation before it is voted on. The rider was authored by Montana Democratic Sens. Max Baucus and Jon Tester and by Idaho Republican Rep. Mike Simpson. Wyoming Republican Rep. Cynthia Lummis also advocates for de-listing. It is far from certain that Wyoming would be included, as the state has held up previous de-listing efforts by Idaho and Montana.