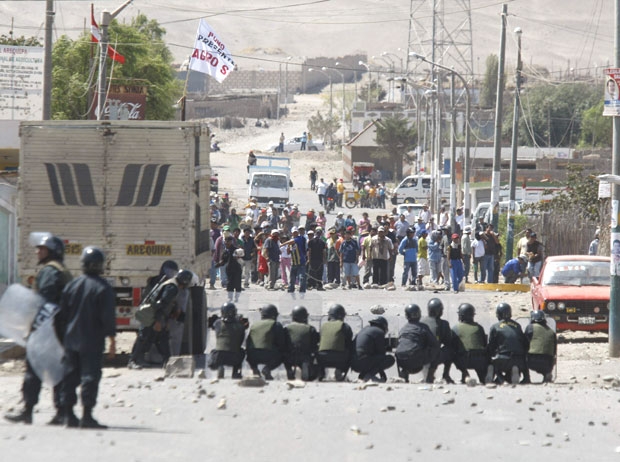 [/caption]   Two people died and over 30 were wounded Thursday in southern Peru when a protest against a planned copper mining project erupted with gun-fire from security forces against the protesters. Thursday’s deaths brought to three the number of people killed this week in protests by agrarian peasants who fear mining by the Mexican company Southern Copper will contaminate water they use to irrigate crops. Sustained protests have gone on for over two weeks near the Tia Maria mine site. Southern Copper, which is owned by Grupo Mexico, has invested nearly 116 million dollars out of a 950 million dollar investment project in the mine. Officials at Islay Hospital say the two dead protesters were killed by gunshots. Both were shot in the head. Earlier in the week, a 22-year-old man identified as Huancapuma Clemente died after being shot in the abdomen during a demonstration in the town of Mollendo, near the Islay province. The regional police commander says protesters set fire to a municipal building and local headquarters of the governing party. Protesters also blocked access to the port of Matarani, where ships load ores for export to China. Earlier in the week Peru’ s government issued an order to temporarily suspend an environmental impact study of the Tia Maria mine project. If you would like to call the mining company behind the murders here is there US office number: Arizona: (602) 494-5328