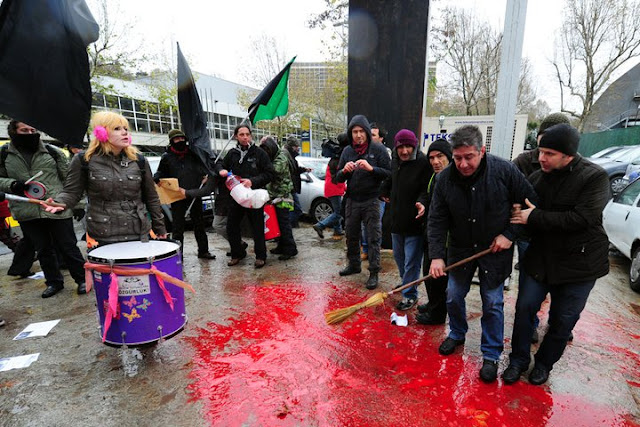 In their own words: “Animal Liberation Initiative and Rhythms of Resistance Istanbul was in front of Medrano Circus in Istanbul to protest the cruelty and animal abuse. While the protesters were going in front of the gate of the circus, the employees attacked to protesters. The protesters who counteracted to employees, increased the slogans and the rhythms and decided not to go away from the circus. They continued to expose the cruelty to animals in circuses.

In the action, the protesters who carried the banner “Animal circuses are not entertainment, it’s cruelty. Human Liberation, Animal Liberation, Earth Liberation” and black / black-green flags, shouted these slogans: “Don’t go to circuses, block the cruelty”, “Close the circuses, release the animals”, “Murderer Medrano, get out the planet”, “Direct action to the cruelty”.

When the protesters dumped tens of liters red paint for to draw attention the cruelty and persecution in circuses, the employees of Medrano attacked to protesters again. The policemen was unresponsive to this violence as always. A few protesters were pushed in to the circus area by employees forcibly and they beated the protesters in the circus area. The activists read a press relase about the cruelty in circuses. Furthermore, in the action, a few protesters masqueraded as pregnant for to protest the policemen attacked to a pregnant student woman and killed her foetus. They carried a placard: I’m pregnant and on action. While the press release was reading, a few employees throwed to protesters red paint by a whisk. The protesters wrote the slogans on the wall of the circus area, cages and trucks and demolished the pancarte and advertisements of Medrano circus.

After the action, the protesters went to solidarity with other protesters who sat in for 4 days in front of an energy company who wants to build a hydro-electric power station in different villages of Turkey.”

You can look at the links for details and photos of the actions in Turkish: 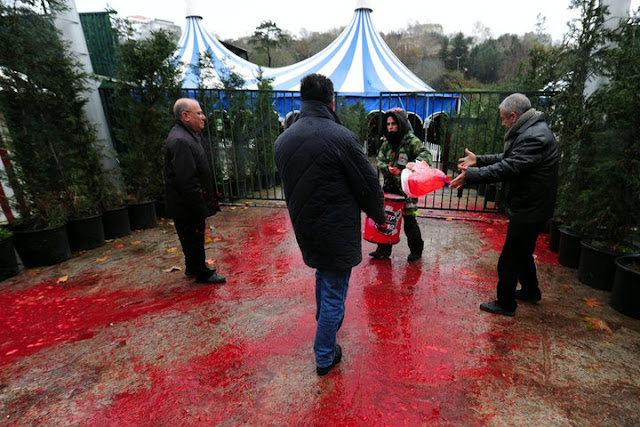