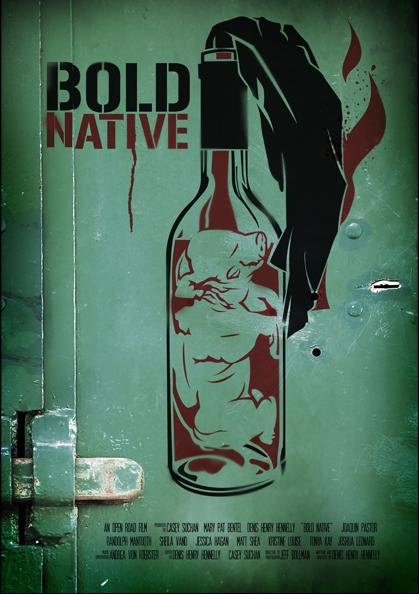 There is something to be said about a film that will most likely reach a broader audience than an ALF documentary or communique. It’s about time for the subject to garner more professional cinematic attention, considering the last couple decades of high profile acts of economic sabotage by animal liberators, and a Federal budget of billions to stop the ALF. While the movie does not accurately portray good security culture in underground organizing, it is exciting, and as a dramatic and philosophical piece, it pries open the mainstream stereotypes — and the governments catch words — about violence, terrorism, and animal liberation, revealing a world of freedom and independence behind the factory farm of everyday life.

Russ McSpadden: I believe that when we spoke last you mentioned that some research for your film Bold Native was done using the Earth First! Journal. We run many articles on the animal rights movement, SHAC, and the Animal Liberation Front. I wonder if you could just elaborate a bit about that? We’ve also recently moved our office to Florida, just a few miles from where the animal liberation magazine Bite Back is produced. Could you explain its influence on the film as well?

Denis Henry Hennelly: Both Bite Back and the Earth First! Journal were publications that we read during our research process for Bold Native (along with dozens of books, websites and interviews). We began working on the script in 2001 and revised it many times before we started shooting in late 2008. We found both publications very useful in terms of understanding the ideology and practice of direct action. Since the vast majority of people who take direct action for non-human animals or the environment are never caught (and therefore never do interviews or speak with others about the reasons for their actions), publications like the Earth First! Journal, Bite Back, and No Compromise were essential for our understanding of why people are driven to risk their freedom and safety for the lives of non-human animals. The film is really philosophical fiction and is definitely not a how-to guide or a history lesson, so our research did not directly translate as much as help us understand the ideas in a way that we then tried to translate into characters and drama.

RM: As the writer and director of the film what do you hope the influence of Bold Native will be both to film and the politics of animal liberation?

DHH: We hope that others are inspired to tell provocative, political, revolutionary stories through film. The technology has really democratized the medium to an extent we have never before seen as a culture. It’s possible to make a totally professional-feeling film with very little money if you’re willing to pour time, energy, and craft into it. And ideas are free, so we’d like to see people making these kind of guerilla films take on bigger issues than relationship problems of white guys in their 30’s.
As far as the politics of animal liberation, we’d like people who see the movie to come away with the understanding that while Animal Liberation Front-type activities may be crimes, they are not terrorism and they are not violence. And that the next time that person hears a politician or newscaster call such actions terrorism, they will know its because of an economic, corporate agenda and not because the ALF or ELF member wishes to cause terror. We particularly hope that it helps those in mainstream groups avoid the use of the word violent or terrorist when discussing underground actions. For those already involved in animal rights activism, we see the film as an opportunity to discuss some of the different ideologies currently at play in the movement.

RM: We noticed Peter Young was in the film. Were many of the actors, as well as the brains behind the film, activists working for animal liberation?

DHH: The four filmmakers are all abolitionist, ethical vegans. Many of the actors are as well. We did not make it a requirement that someone be a vegan to act in or work on the film, but we did look for them when casting the liberators because we knew there would be a lot of improv and it would be easier if they were already somewhat familiar with the ideas. Also, we knew the shoot would be tough and we wanted people committed not just to the craft of acting, but also to the message. The set was vegan.
We tried to incorporate activist cameos whenever possible because it was fun for us and it also helped give the film a sense of reality. Peter had gotten a copy of the script from a friend and wanted to meet us when he was in LA. We had dinner and talked about the script and animal liberation philosophy. A few days later we asked him to play a cameo role in the film and he agreed.

RM: Have you experienced any legal problems in regards to the subject of the film? Are there any concerns about the Animal Enterprise Terrorism Act? How about financially, has the subject of animal liberation caused any issues with funding and promotion from the film industry?

DHH: We have not experienced any legal problems. We have had the film reviewed by an attorney to be sure we are within our rights as filmmakers. We have lots of concerns about the Animal Enterprise Terrorism Act, but not in relation to our movie! While our country is increasingly losing sight of what the First Amendment means, filmmaking and artwork still remain pretty secure as mediums of free expression. Most people would consider infringing on these rights to be deeply Un-American.
We looked for financing for this film, but were not successful, so we ended up funding it ourselves. That’s part of why it took 8 years to get it going… but we’re thankful for that time as we became better filmmakers and the script got much better. We also tried to pursue the normal routes of distribution with the film, but were also unsuccessful there. It’s become clear that the distribution channels available to independent filmmakers are not willing to take on material that really challenges people. They’ll take on material that shocks through sex and violence, but when it comes to questioning morality and behavior (including that of the person acting as gatekeeper), they’re not so interested. Fortunately, technology is so awesome right now that we’ve been able to distribute the film successfully ourselves with no budget. We’re thrilled to be totally in control of getting this movie to its audience without compromise.