Six activists chained themselves to a crane in western Turkey today in protest against a hydroelectric dam that will mean the destruction of an ancient city of Allianoi. Like the Glenn Canyon dam, which destroyed thousands of unexplored artifacts of indigenous peoples, the Yortan Dam in western Turkey threatens to cover with sand and submerge under water an archeological and spiritual center of Turkish culture and life. That’s why the activists from the group Doğa Derneği (Nature Association), including the chairman, locked down. Güven Eken, the chair of the Nature Association exclaimed, “This is a massacre of nature and a violation of the law.”
“The ancient city is being covered with cement, which contains brick dust. This cannot be done for [ancient] ruins and is also inconsistent with the commission’s decision. The place resembles more a construction site.”
The six activists were arrested later this morning.

Outrage and Defiance in Germany 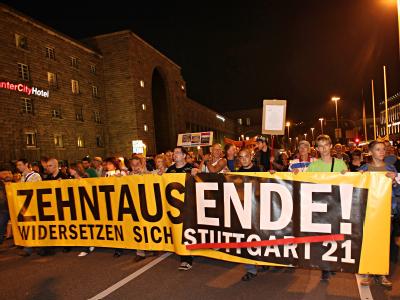 Prime Minister, Angela Merkel, has staked her career on the building of a new vainglorious train station called “Stuttgart 21.” In response, the city of Stuttgart has been rocked by paroxysms of protests for months. Some insist that the protests seen today can only be compared to the peace and anti-nuclear movement of the 1970s and 1980s during the Cold War days of the Berlin Wall.
Every week, tens of thousands of people stand before the central station to prevent its demolition and eventual replacement. These protests should also be compared to the advent of Autonomism, because they consist of multifareous smaller protests occurring throughout the country. For example, every day, 7 pm is marked by the “Schwabenstreich”—the tramping of feet, clanging of pots and pans and honking of car horns. The protests have been confrontational, as well; at one point, several hundred activists stormed and occupied the building site, sparking confrontations with the police.
Although some, including the epic newspaper, Der Speigal, have called this the new “bourgeois revolt,” there is more texture involved: most protesters are resisting the prestige project, Stuttgart 21, which comes off as part of a champagne socialist agenda that spends millions on a single, “avant-garde” project while ignoring basic needs of public transportation, schools and so forth. Stuttgart 21 will also be linked to other European cities by a controversial high speed rail—the same transportation infrastructure that stoked environmental direct action movements comprised of groups like the Tarnac 9 and the Catalonian Tree-Sits.
Two weeks ago, tens of thousands of protesters also protested nuclear energy in Berlin, showing that the environmental movement is not just an undercurrent in the consciousness of the German resistance movement. Chancelor Merckel has attempted to extend the life of Germany’s nuclear power plants by 12 years past their 2021 expiration dates. According to organizers, 100,000 people showed up to manifest their anti-nuclear wishes, though the government places its estimates at 40,000. Either way, as the weeks roll by, no one can deny that hundreds of thousands of people are taking part in a powerful movement that contravenes the direction of the elites. Nuclear energy and high speed rails are out—direct action in defense of the Earth is the watch word of a new international movement with roots in a horizontally organized communities of resistance that stretch back over generations.

Wisconsin Citizens Call for Review of Biomass Plant
Wisconsin environmental group, Wisconsin Public Service Commission, is demanding that a proposed local biomass plant goes through a more rigorous environmental review before it is constructed in the city of Rothschild. 40,000 houses would be powered by the plant, but 275 people turned out at a public meeting to protest the project, saying it would increase pollution, traffic and other undesirable affects.