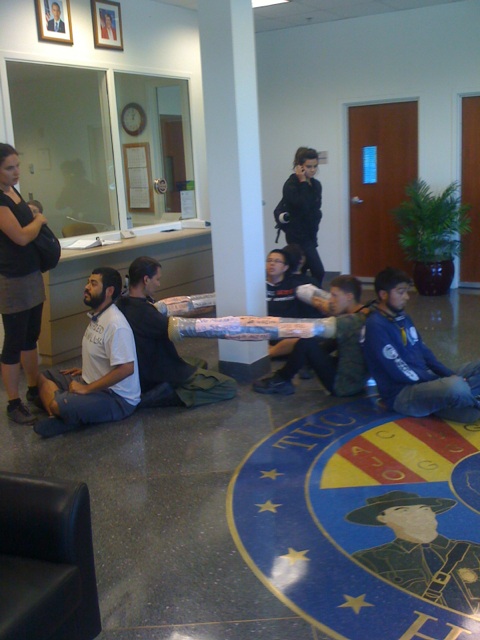 Six activists locked down inside the border patrol’s lobby here in Tucson, and they all were cited and released. Just walked away, and felt damn good about it. They won the local news cycle, sending racist cops a strong message. But they didn’t expect to get away, and our sources say they were prepared to sit in jail at least through the weekend. Anybody planning similar actions should be similarly prepared.

The new EF! UK Action Update is out. Here’s the print version. Both are in PDF.

We got the mountain defenders’ bail reduced to $2500!

Martin and Bryant were offered a deal of 5 days time-served and 55 days community service, along with the conditions that they remain on house arrest for the 55 days, leaving only for community service hours, and plead guilty to trespass and conspiracy.

Bryant took the deal and will be getting out of jail Monday. EmmaKate did not immediately take the deal.

Like in Tucson, the theme here in WV is be prepared. These CGZ folks made the decision to intentionally go to jail for their beliefs, and that’s what happened. They were mentally and physically ready for it (hopefully). At least one is also under house arrest for awhile. They apparently believe that blocking Massey’s Road for a minute, and the media coverage that comes with, is worth the next 60 days of their lives. We’ve heard that more people with such strong convictions are needed out in the mountains, because MTR SUCKS.

We will be commemorating Judi Bari’s life and work, as well as celebrating to EEF! folks whose legal matters (panagioti and stevie) have been resolved, without going back to jail. Both got out of jail on appellate bonds from actions against FPL (who are now calling themselves ‘NextEra Enrgy’), for the WCEC and Barley Barber.

And finally, we will be discussing the ‘Skunk Ape Proxy’ featured in the new EF!J.

The Richardson Grove EIR has been released by CALTRANS. It of course finds “no significant impact on the human environment.” Well, some environmentalist humans in Humboldt think otherwise and are still set for an action camp on 28 May.

Some EF!ers are having a Regional Rendezvous in the Globe Forest in NC. Seems like a pretty good operation they’ve got out there, with a great website full of great information. It’s at least an even bet that they’ll save that forest out there. Forest defense has a lot of potential in the South, which is being deforested faster than any other US region, especially when it’s fresh like in WV, with tactics the locals haven’t necessarily seen before. And on that note, we found this on their blog and thought it worth re-posting:

Top Ten Endangered Areas in the South for 2009: