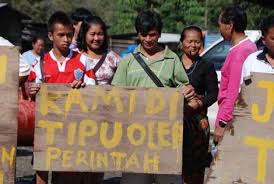 A local NGO has slammed Assistant Minister of Culture and Heritage Liwan Lagang for lying to Senior Minister-cum-Land Development Minister James Masing on the situation with the Penans who were protesting the Murum Dam construction.

Liwan had apparently told Masing that the protesting Penans have agreed to dismantle the blockades mounted since last month on the access road into the dam’s construction site.

“The blockades are still there. However in the last two days some of the Penans went back to one of the villages, Long Luar, because one of the men died on Saturday and an elder woman died in Long Singu.

“In the meantime a strong force of Penans is still at the blockade sites. Lagang is lying about the Penans. He has no respect for the Penan people,” Abin said.

Abin was commenting on a statement made by Masing who revealed that Lagang had successfully negotiated with the Penans to dismantle the blockades.

Lagang, who is the Belaga assemblyman, headed a negotiation team with the Penans on behalf of the government in Belaga on Oct 25, 2012.

According to Masing, Lagang had “briefed” them about the Penan situation in Murum, saying the Penans had dismantled the blockades and that the government was looking into their requests “very seriously”.

“I am very confident all the issues will be settled,” Masing had told newsmen after Parti Rakyat Sarawak’s (PRS) supreme council meeting in Sibu on Saturday.

In his message to FMT, Abin said: “Please help to correct this misinformation (that the blockades have been dismantled) as the Penans are very angry.

Since the Penans erected the blockades against the construction of Murum Dam on Sept 26, 2012, their dilemma has been highlighted by both the opposition and non-governmental organisations (NGOs) including international organisations.

It will become a hot issue in Hulu Rajang parliamentary constituency where PRS will be putting a candidate.

And this is worrying not only PRS, but also the state government.

This was clearly expressed by Masing when he called on the government to handle the Penan issues “carefully and with fairness” because the international community is keeping a close tab on how the Penans are being treated.

“We have to handle them carefully and with fairness. That is very important,” he said.

More than 1,600 Penans from eight Penan villages are affected by the construction of the dam which is now about 70% completed.