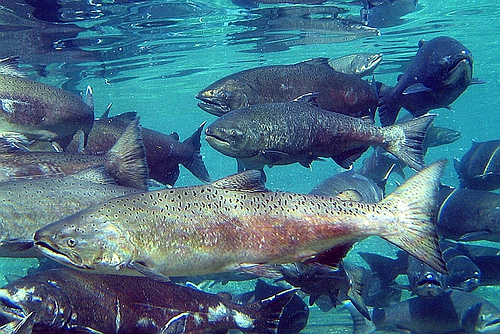 For the second time in a week, someone snuck into the Romberg Tiburon Center for Environmental Studies and cut loose thousands of young Chinook salmon being raised by students and volunteers for an annual fish restoration project.

No one has claimed responsibility for releasing the 20,000 young Chinook smolts sometime between 4 a.m. and 8 a.m. Saturday, nearly a month ahead of schedule. On Oct. 3, more than 40,000 Chinook raised by students from Petaluma’s Casa Grande High School, in partnership with the Tiburon Salmon Institute, were also released prematurely.

The salmon institute’s executive director, Brooke Halsey, said Sunday that he was devastated by what he called acts of vandalism.

“These people who did this are cowards and they’re not going to show their faces,” Halsey said. “I’d love for them to tell me who they are and meet them face to face. The big question is, what did they accomplish by this?”

Animal rights activists have criticized the pens used for the project as “filthy” and “overcrowded.”

“People involved in the program have been vocal about how well their fish (are) treated,” animal rights activist Peter Young wrote Sunday on a blog that reports on the activities of the Animal Liberation Front. “They don’t say this ‘humane treatment’ is 20,000 fish each in 16-by-25-by-8-foot pens. Television news footage of the pens show fish packed at a density that is clearly inhumane and unnatural for any salmon.”

The first 40,000 young salmon were bred and raised by members of Casa Grande High’s United Anglers Conservation Fish Hatchery, a licensed fish hatchery program. The second group of salmon was raised by volunteers at a Feather River hatchery.

In both cases, someone cut the nylon ties that held the nets together, Halsey said.

All of the young salmon were scheduled for release into the wild during an Oct. 30 event that was supposed to be the culmination of everything the students had learned, he said.

“We’re teaching that a balanced ecosystem leads to a balanced harvest,” he said.

Although all the fish are gone, the institute is seeking donations to keep the program going. Halsey, a former Sonoma County deputy district attorney, said the Marin County Sheriff’s Office and the FBI are investigating the incidents.